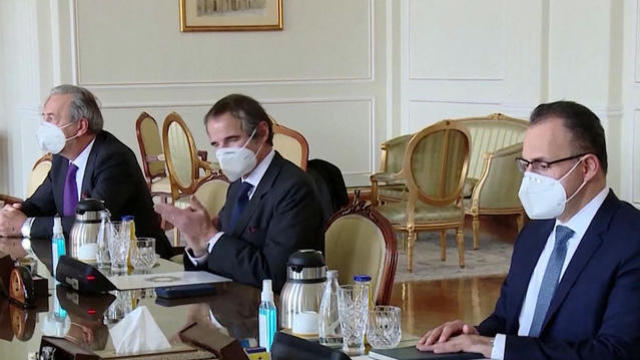 ▶ Watch Video: U.S. carries out airstrikes in Syria on Iranian-backed targets
The U.S. on Thursday conducted its first military action under President Biden, targeting infrastructure used by Iranian-backed militant groups in Syria in response to recent rocket attacks in Iraq. Defense Secretary Lloyd Austin told reporters traveling with him that he had recommended the strike to Mr. Biden, who authorized it in a phone call on Thursday morning.

“The operation sends an unambiguous message: President Biden will act to protect American coalition personnel,” Pentagon spokesperson John Kirby said in a statement. Iran-backed militias have targeted U.S. forces in Iraq and Syria for years, most recently in a rocket attack on the northern Iraqi city of Erbil last week that wounded four American contractors and one military service member.

The strikes destroyed multiple facilities at a border control point in al Bukamal, Syria, used by a number of Iranian-backed militant groups, including Kataib Hezbollah and Kataib Sayyid al Shuhada, according to Kirby.

The Pentagon spokesman did not mention any casualties, but U.K.-based monitoring group the Syrian Observatory for Human Rights said on Friday that 22 people were killed in the strikes, which it said had hit three trucks carrying munitions from Iraq into Syria. The organization said all of those killed were believed to have been members of the Iran-backed militias.

In the first military strike of his presidency, Mr. Biden approved a target along the Syria-Iraq border that would serve as payback for Iran putting U.S. personnel in harm’s way — but stop short of further escalating tension with Tehran as he tries to draw the Islamic Republic back into the crumbling 2015 nuclear deal.

An administration official confirmed that the Biden team had selected the targets as part of a calibrated response meant to meant to achieve three things: Send a signal to Iran that the new U.S. president would not tolerate rocket attacks that put U.S. personnel in harm’s way; avoid angering U.S. partners in Iraq who need to keep good relations with both Tehran and Washington, and avoid provoking Iran to retaliate further.

Two former Trump administration officials told CBS News that the al Bukamal area has been a target of scores of Israeli strikes in recent months because it is serves as a transhipment point for the Iranian-backed Shiite militias in both Syria and Iraq. Both officials approvingly acknowledged the selection of the location.

One of the former officials said, “it is easier to send messages there as we’re less exposed.”

The Biden administration’s strike against Iranian-backed militias follows on the heels of its first diplomatic outreach to Iran regarding American hostages in the country, as well as its public offer made via European diplomats to restart talks on Tehran’s nuclear program. Both of those diplomatic initiatives were made last week.

Last week, a rocket attack in Erbil, northern Iraq, killed one contractor, who was not an American citizen, and injured four American contractors and one American service member. A total of eight contractors were injured, two seriously enough to require evacuation.

The United States had evidence that the attack was conducted with Iranian-supplied equipment. The attack on Erbil consisted of 14 rockets, with six more left on the launcher rails.

The most recent airstrike against Iranian-backed militias was in December 2019, which hit targets in both Iraq and Syria. There was no immediate response from Iranian officials to Thursday’s U.S. strike.