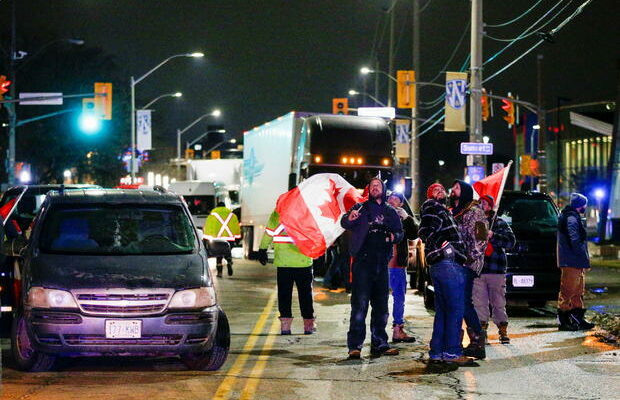 Protestors block the last entrance to the Ambassador Bridge, which connects Detroit and Windsor, effectively shutting it down as truckers and their supporters continue to demonstrate against COVID-19 vaccine mandates, in Windsor, Ontario, Canada on February 9, 2022. CARLOS OSORIO / REUTERS
▶ Watch Video: Trucker protest keeps border crossing with Canada closed
The Department of Homeland Security is warning U.S. law enforcement agencies that a group of truckers is planning a protest of COVID-19 vaccine mandates that could start as soon as this weekend in Los Angeles, site of the Super Bowl.

The bulletin, obtained by CBS News, says the convoy could then head east, perhaps reaching Washington, D.C. in time for President Biden’s State of the Union address on March 1.

The bulletin warns that the convoy “could severely disrupt transportation, federal government, and law enforcement operations through gridlock and potential counterprotests.”

The warning comes as the trucker protest in Canada begins to hinder production at some U.S. auto plants finding themselves short on parts.

The bulletin says the DHS “has received reports of truck drivers planning to potentially block roads in major metropolitan cities in the United States in protest of, among other things, vaccine mandates for truck drivers.

“While there are currently no indications of planned violence, if hundreds of trucks converge in a major metropolitan city, the potential exists to severely disrupt transportation, federal government operations commercial facilities and emergency services through gridlock and potential counter protests.

“According to law enforcement sources, the group intends to start in California and travel to Washington, D.C., reportedly gathering truckers as they travel across the country; It has also been suggested that truckers from Canada may join the Washington, D.C. event.”

The warning was circulated to law enforcement nationwide on Tuesday and was first reported by Yahoo News.