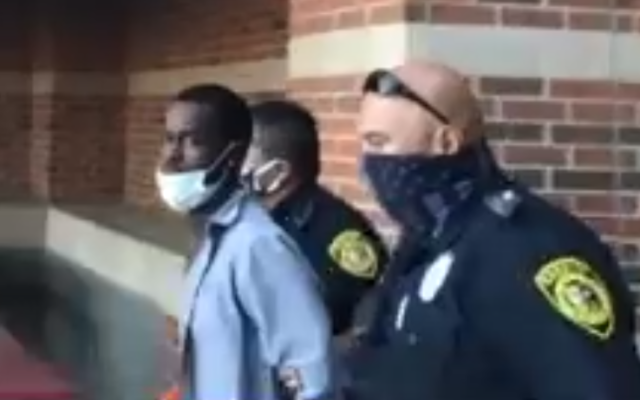 Suspect Taron Bowie is being taken from the Bexar County Jail into an awaiting sheriff's office cruiser after being arrested on May 18, 2020, on an aggravated assault with a deadly weapon charge. (Pool image)

The Bexar County Sheriff’s Office arrested a 23-year-old man in connection to the May 13th shooting on Lake View Drive.

The sheriff said three men — ages 18, 19 and 23 — were at the laundromat to sell an Xbox.  Salazar said there are some doubts about whether it was really an Xbox they were selling.  Negotiations were going on when Bowie, who had been hiding behind the building, stepped out and started shooting the victims.  The 18-year-old was hit in the back and the 19-year-old was shot in the foot.

“If robbery were the straight-up motive, they could have just robbed these victims, but he came out shooting,” the sheriff explained.  “It appears that he just didn’t care if he was hitting somebody, not hitting anybody, killing somebody in the process, it just shows that he was indiscriminately spraying gunfire and two of these three young men suffered injuries that I hope they will make a recovery from.”

Deputies found him with a shortened AR-15 rifle.  The sheriff said the butt of the gun had been replaced with a short bar to make it easier to “spray and pray”.  It had been hidden inside a throw pillow.

Bowie was charged with aggravated assault with a deadly weapon and marijuana possession.

Salazar said Bowie does have connections to organized crime, but would not disclose which organization he is connected to.  The sheriff said Bowie is from New Orleans and the office is working to see how long he has been in the San Antonio area.  There is a chance he may be connected to other violent crimes the sheriff’s office is investigating.

BEXAR COUNTY, Tex. (KTSA News) — The Bexar County Sheriff’s Office is increasing its patrol presence and asking for the public’s help after a recent uptick in violent crimes in the eastern part of the county.

Sheriff Javier Salazar highlighted six recent violent crimes to reporters Monday that have happened in the past 10 days or so that the sheriff’s office is investigating.

The first is a shooting that happened on Windsor Oaks — which is off of Walzem Road — on May 9th.  Someone there heard gunshots while he was inside his home that day.  He went outside and found several cars had been shot up.  A witness said the suspect vehicle was a silver car.

The second is another shooting in the 8700 block of Glen Mont Drive on May 12th.  Salazar said the suspect went to a house there looking for a specific person who no longer lived at that address.  The suspect went back to his car, grabbed his gun and shot at the house.  No one was hurt.  The car is believed to be a 1995 or 1996 gold Toyota Camry — or a similar vehicle — that is missing a front passenger side hubcap.  The sheriff said the suspect is believed to be 18-23 years old, stands between 5’10” and 6′ tall and weighs between 140 and 160 pounds.

The third case is an aggravated assault at 2 a.m. the next morning at the Circle K on the corner of Foster Road and Binz-Engleman Road.  Salazar said deputies found a suspicious vehicle that was later discovered to have been stolen from California with a man passed out inside.  Deputies found a shortened AK-47 rifle/pistol hybrid in the car as well as a misdemeanor level of marijuana.  That person is considered a suspect in other cases.

The fourth case happened later that day — at around 5 p.m. — at a laundromat near the corner of Foster Road and Lake View Drive.  Two men were shot there, but went to the nearby Family Dollar on Foster Road where they were able to get a deputy to help them.  Salazar said one was shot in the back, the other was shot in the foot by an unknown man.  The sheriff said they had met another man at the laundromat to exchange an Xbox for cash.

“Of course, you look at that with a grain of salt as well, realizing that an Xbox is very little motivation to shoot somebody over,” the sheriff explained.  “Typically, you see that happen when a drug deal goes bad.”

The fifth case was a shooting that happened in the 7800 block of New World Drive at 8 a.m. on May 15th.  The 911 caller said he heard several gunshots and discovered a car had been shot.

The six case was another shooting just a few hours later in the 8100 block of Steep Valley — which is near the Converse city limit off of FM 78.  Salazar said someone heard shooting outside and found damage to their home — which had children inside.  No one was hurt.  The shots went through a window, a wall, a garage door and a television inside the house.  The sheriff said it is believed a silver vehicle with a man and woman inside.  The man was seen shooting at the house.  Salazar said the man is described as Hispanic or light-complected black man with short hair and facial and the woman was black with large hair.

Anyone with information on these ne’er-do-wells are encouraged to call Crime Stoppers at 210-224-STOP.

The sheriff’s office has put up a mobile substation at FM 78 and Walzem Road to do a direct patrol of the area to help further investigate these crimes and also deter any other criminal actions crooks may seek to do.

“We figured something is going on,” Salazar explained. “Somebody is either trying to make a name for themselves, somebody’s trying very, very hard to instill fear in the residents in the area.  Quite frankly, those may be tactics used by organized crime in this area.”

While the mobile substation is there to assist with patrolling the area more directly, it is a place for people who wish to speak with investigators or report a crime can go with their information.

Salazar said this tactic has been proven to work and even if these delinquents move on to another part of the county, the sheriff’s office has the capability to again drive them away.