US abortions may be inching up after decades of decline 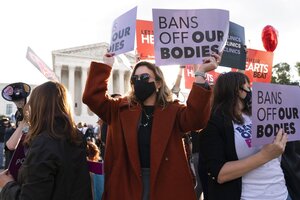 FILE - Emily Halvorson, center, of Washington, with Planned Parenthood, joins groups of abortion-rights and anti-abortion activists as they rally outside the Supreme Court, on, Nov. 1, 2021, as arguments are set to begin about abortion by the court, on Capitol Hill in Washington. U.S. abortions appear to be inching up after a long decline, though officials are cautious about calling it an upward trend because a government report issued Wednesday, Nov. 24, 2021, is incomplete. (AP Photo/Jacquelyn Martin, File)

NEW YORK (AP) — U.S. abortions appear to be inching up after a long decline, though officials are cautious about calling it an upward trend because a government report issued Wednesday is incomplete.

But the next two years, there were small increases in the abortion rate and numbers, the Centers for Disease Control and Prevention reported.

The CDC report represents the latest available data on U.S. abortions. But it must be interpreted cautiously because it is based on voluntary reporting and is not comprehensive, experts say.

Among its limitations: It does not include abortions from three states — including California, the nation’s most populous state. Other states may have significant undercounts.

Those omissions mean that as much as 30% of the nation’s abortions may not be captured in the CDC data, according to officials at the Guttmacher Institute, a New York-based nonprofit research organization that supports abortion rights. The group conducts a more comprehensive survey of all U.S. abortion providers every three years, and its next report is due out next year.

Despite the CDC report’s limitations, it generally has painted a similar overall picture to what Guttmacher reports, said Rachel Jones, the lead researcher on that project.

“Historically, the trends tend to be the same,” Jones said.

U.S. births have been declining for more than a decade, meaning for years both births and abortions have been falling.

The idea that abortions may be increasing lately may be surprising, especially given recent efforts in many states to restrict abortions.

“If it means more people are getting access to care when they need it, than this is a positive development,” Jones said.

An increase could be related to access and use of birth control, and it may even be tied to whether more people are having sex, she said.

The report also showed about 18% of all pregnancies in the U.S. ended in abortion.

Jones noted that it is hard to make general statements about U.S. abortion trends, because there can be dramatic differences from one state to the next. And numbers in one state can increase if women are traveling there from other states.

It’s not yet clear what abortion trends will look like for 2020 during the COVID-19 pandemic. Some states — including Indiana, Iowa and Kansas — have reported increases. But it’s possible that abortions declined in many places during lockdowns, Jones said.

“Whatever happened in 2020 wasn’t just a matter of a long-term trend. It also was impacted by COVID,” she said.