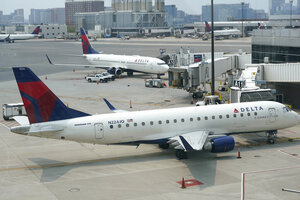 Rising concern about the fast-spreading delta variant of COVID-19 is creating turbulence for the stocks of big travel companies, but airline executives say they don’t see any slowdown in ticket sales, maybe because a high percentage of their best customers are fully vaccinated.

“We haven’t seen any impact at all on bookings, which continue to just get stronger and stronger every week,” United Airlines CEO Scott Kirby said Wednesday.

Delta Air Lines CEO Ed Bastian said the same thing last week, although he added that variants were continuing to hobble international travel by delaying the opening of borders.

More than 2 million people a day, mostly summer vacationers, are packing U.S. airports. That is a turnaround from the lockdown summer of 2020.

The travel recovery took hold earlier this year as vaccinations rose and infection cases fell. Now variants are fueling a tripling in new reported cases of COVID-19 in the U.S. over the past two weeks — although just a fraction of the January peak — and driving outbreaks in other countries.

Earlier in the pandemic, airlines saw that bad headlines about the virus would prompt large numbers of people to cancel trips. For much of 2020, cancellations outpaced ticket sales. Americans seem less skittish about the variants now that many of them are vaccinated, airline executives say.

United said its cancellation rate has not changed in the last few weeks, although it remains higher than before the pandemic. It could be due to the millions of Americans — particularly those who travel — who have been vaccinated against COVID-19.

About 57% of Americans who are old enough for the shots are fully vaccinated, according to government figures. United said that 84% of the members of its frequent-flyer program are vaccinated.

Even if travelers are unmoved by the headlines, investors have been spooked. They worry that the rise of variants could lead governments to reimpose travel restrictions that might short-circuit the travel recovery.

Airline officials are lobbying the Biden administration to lift restrictions that prevent most Europeans from entering the United States, but the limits imposed in March 2020 remain in place. They note that many European countries have eased border restrictions, leading to a surge in bookings by American vacationers this summer.

“We are working closely with the government, and it’s a two-way conversation where they are getting input from us, input for them,” Kirby said on a call with analysts and reporters. “All of us want to make sure we do this safely.”

Kirby said the industry has shown willingness to accept vaccination requirements, as many other countries require of visitors from the U.S. and other places.

White House press secretary Jen Psaki said Tuesday — without providing many details — that discussions with other countries are continuing. She saw no contradiction in European countries welcoming Americans while the U.S. continues to bar most non-U.S. citizens traveling from Europe.

“We give American citizens guidelines. They make their own decisions about whether they travel to certain countries around the world,” she said. “Any decisions about reopening international travel (to the U.S.) will be guided by our own public health and medical experts.”

In afternoon trading Wednesday, shares of American Airlines rose 4%, United and Southwest climbed about 3%, and Delta gained 2%. Cruise line and hotel stocks were also up.

David Koenig can be reached at www.twitter.com/airlinewriter