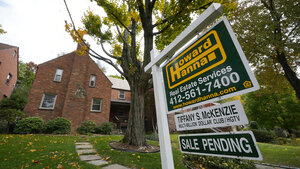 FILE - This is a home in Mount Lebanon, Pa., under contract, Oct. 17, 2022. Sales of previously occupied U.S. homes fell in September for the eighth month in a row, though the decline was the most modest yet since the housing market began to cool amid sharply higher mortgage rates. The National Association of Realtors said Thursday, Oct. 20, 2022 that existing home sales fell 1.5% last month from August to a seasonally adjusted annual rate of 4.71 million. (AP Photo/Gene J. Puskar, file)

Sales of previously occupied U.S. homes fell in October for the ninth month in a row, the slowest pre-pandemic sales pace in more than 10 years, as homebuyers grappled with sharply higher mortgage rates, rising home prices and fewer properties on the market.

Sales fell 28.4% from October last year, and are now at the slowest annual pace since December 2011, excluding the steep slowdown in sales that occurred in May 2020 near the start of the pandemic.

House hunters had fewer properties to choose from as the inventory of homes on the market declined for the third month in a row. Some 1.22 million homes were on the market by the end of October, which amounts to 3.3 months’ supply at the current monthly sales pace, NAR said.

The housing market has been slowing as average long-term U.S. mortgage rates have more than doubled from a year ago, making homes less affordable.