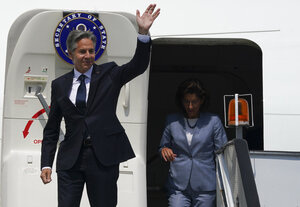 MEXICO CITY (AP) — A high-level United States delegation on Monday invited Mexico to participate in a push to shift semiconductor production from Asia to North America and expand production of electric vehicles.

López Obrador, for his part, explained his plan to make the northern border state of Sonora a leader in lithium, electric vehicle and solar energy production, Ebrard said. Lithium is a key component of batteries for electric vehicles. The president said last month he had already discussed the idea with U.S. President Joe Biden.

The U.S. delegation was in Mexico for a new round of High Level Economic Dialogue. The U.S. side was represented by Blinken, Commerce Secretary Gina Raimondo, Deputy U.S. Trade Representative Jayme White, and Juan González, the National Security Council’s senior director for the Western Hemisphere.

The dialogue, which was launched by then-Vice President Joe Biden in 2013, resumed last year in Washington after stopping during the Trump administration.

The global shortage of semiconductors has slashed into production of autos, household appliances and other goods, fueling high inflation. Biden appeared at the future site of a massive Intel plant in Ohio on Friday.

Last month, López Obrador said the government had created the state-run lithium company that would be in charge of the exploration and extraction of the mineral. Mexico nationalized lithium production in May.

Asked about ongoing trade disputes between the U.S. and Mexico in the energy sector, Ebrard said there was a separate process for resolving those disagreements and that it was not an agenda item for these meetings.

Ahead of the talks, Assistant Secretary for Western Hemisphere Affairs Brian Nichols, who is also attending, said one of the priorities for the talks was promoting development in southern Mexico and Central America.

U.S. border agents’ encounters with migrants from the Northern Triangle countries — El Salvador, Honduras and Guatemala — have been running lower this year than last, despite overall encounters at the border being up this year, according to U.S. Customs and Border Protection data. Encounters with Mexican migrants have also been higher for most of the past year.

Mexico has more recently avoided direct clashes with migrants moving across its territory, instead regularly offering them temporary documents to relieve pressure at its southern border.

López Obrador has more recently come under fire from some international and domestic organizations for transferring the recently created National Guard to the Defense Ministry. In many ways, the military already ran the force — and filled its ranks — but it had been created as a civilian force. López Obrador criticized the U.N. and the Organization of American States Monday for expressing their concern over the move.

Mexico continues to struggle with high rates of violence. On Friday, the United Nations Special Rapporteur on the human rights of internally displaced persons said at the conclusion of a visit to Mexico that the violence related to Mexico’s drug cartels was the main force causing internal displacements. She called on the government to create an official registry of the displaced, but said data collected from non-governmental organizations suggested there are some 400,000.

The talks come just days before Mexico celebrates its independence day, to which López Obrador has invited figures such as the daughter of revolutionary leader Ernesto “Che” Guevara and the father of Wikileaks founder Julian Assange.

At López Obrador’s daily news conference Monday, the president said he planned to submit a proposal to the U.N. aimed at ending Russia’s war in Ukraine. López Obrador, who did not join other countries by imposing economic sanctions on Russia, proposed creating a mediation commission made up by Pope Francis, the U.N. secretary general and India’s prime minister that would open talks between the presidents of Russia and Ukraine.