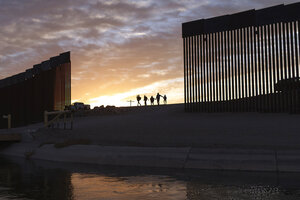 FILE - In this Thursday, June 10, 2021, file photo, a pair of migrant families from Brazil pass through a gap in the border wall to reach the United States after crossing from Mexico to Yuma, Ariz., to seek asylum. The Biden administration proposed Wednesday, Aug. 18, to change the way asylum claims are handled, aiming to cut a huge backlog of cases from the Southwest border that has resulted in people waiting years to find out if they will be allowed to stay in the U.S. (AP Photo/Eugene Garcia, File)

WASHINGTON (AP) — The Biden administration on Wednesday proposed changing how asylum claims are handled, aiming to reduce a huge backlog of cases from the U.S.-Mexico border that has left people waiting years to find out whether they will be allowed to stay in America.

Under the proposal, routine asylum cases no longer would automatically be referred to the overwhelmed immigration court system managed by the Justice Department but would be overseen by asylum officers from U.S. Citizenship and Immigration Services, part of Homeland Security Department.

Advocates for the change see it as a way to help those with legitimate claims for protection while allowing officials to more quickly deal with people who do not qualify for asylum or are taking advantage of the long delay to stay in the United States.

“Individuals who are eligible will receive relief more swiftly, while those who are not eligible will be expeditiously removed,” Homeland Security Secretary Alejandro Mayorkas said.

The proposal must go through a public comment period before it can be adopted as a new policy.

The immigration court system has an all-time high backlog of about 1.3 million cases. The Trump administration tried to deal with the issue in part by imposing stricter criteria for asylum and forcing people to seek protection in Mexico and Central America. President Joe Biden’s proposal would streamline the system.

The reason for the change is that more people have been seeking asylum under U.S. law, particularly at the U.S.-Mexico border in recent years.

As the system works now, people who present themselves at the border or are apprehended by the Border Patrol and identify themselves as asylum-seekers must pass what is known as a “credible fear” interview. A USCIS asylum officer determines whether they meet the criteria of someone facing persecution in their homeland because of race, religion, nationality, membership in a particular social group or political opinion.

Even if they pass, their case is now referred to an immigration judge and they can wait years for a resolution.

The theory behind the proposed change is that experienced USCIS asylum officers can more quickly sort cases. People who are denied can appeal and have their case decided in an immigration court. Advocates for the new policy believe some people with weak claims will be dissuaded from trying by the early denial.

DHS plans to hire 1,000 asylum officers and 1,000 support staff to handle the extra workload that will result from the change.

Doris Meissner, a former commissioner of the U.S. Immigration and Naturalization Service, had previously called for adoption of this change, saying in a recent Migration Policy Institute opinion piece that it is “potentially a game changer” that would balance humanitarian protection for those eligible with the need to control the border.

“The recent increase in arrivals at the U.S.-Mexico border, which are the latest in a series of periodic spikes, make this change all the more compelling,” wrote Meissner, now a senior fellow at the institute.

The rate at which asylum is granted varies widely by a person’s country of origin and circumstances. Applicants from Honduras received the protection 10% of the time while the rate for people from China was 37%, according to the most recent statistics from the Executive Office for Immigration Review.