US turns to social media influencers to boost vaccine rates 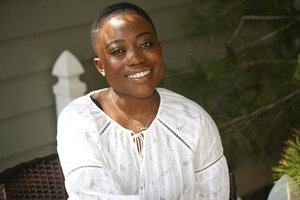 Fashion blogger Abena Antwiwaa poses at her home in Aurora, Colo., on Friday, Aug. 6, 2021. Antwiwaa is one of dozens of influencers, ranging from busy moms and fashion bloggers to African refugee advocates and religious leaders, getting paid by the state to post vaccine information on a local level in hopes of stunting a troubling summer surge of COVID-19. (AP Photo/David Zalubowski)

DENVER (AP) — As a police sergeant in a rural town, Carlos Cornejo isn’t the prototypical social media influencer. But his Spanish-language Facebook page with 650,000 followers was exactly what Colorado leaders were looking for as they recruited residents to try to persuade the most vaccine-hesitant.

Cornejo, 32, is one of dozens of influencers, ranging from busy moms and fashion bloggers to African refugee advocates and religious leaders, getting paid by the state to post vaccine information on a local level in hopes of stunting a troubling summer surge of COVID-19.

Colorado’s #PowertheComeback target audience is especially tailored to Latino, Black, Native American, Asian and other communities of color that historically have been underserved when it comes to health care and are the focus of agencies trying to raise vaccination rates.

The effort comes after Colorado and other states have tried lotteries, college scholarships and other incentives to boost slumping vaccination rates as the highly contagious delta virus variant sweeps the nation.

Cornejo’s Facebook page has become a widely trusted source of information about what the police do — and cannot do — for Latinos in the Colorado River Valley.

“It started last year when I saw misinformation that directly affected our department, rumors like police were arresting people without a mask,” said Cornejo, a 10-year veteran with the Rifle Police Department. “Or that people get magnetized when they’re vaccinated. Sometimes people are just plain scared. I give them fact-based information, nothing political about it, so they can make an informed decision.”

Whether the social media push will move the needle with America’s unvaccinated remains to be seen.

The country last week reached the milestone of having at least one dose in 70% of adults. It came a month after President Joe Biden’s target date, even though most can easily get the shots in the U.S. unlike other countries where they’re in short supply.

“I’m highly skeptical you can get enough appeal to the remaining 30% of adults who after all this time have not gotten the vaccine — it’s a lot to ask of an influencer,” said Jeff Niederdeppe, director of Cornell University’s Health Communication Research Initiative and co-director of The Cornell Center for Health Equity.

More likely to tip the scales is an increase in private companies and organizations requiring vaccinations of employees and patrons, he said.

In Colorado, the state pays citizen influencers up to $1,000 a month for their work on Instagram, TikTok, Snapchat, Facebook and other platforms. The influencers post about their own vaccine experiences, dispel myths and misinformation, alert followers to pop-up vaccine clinics and direct them to information provided by state health authorities.

Abena Antwiwaa, a 29-year-old fashion blogger in Aurora, wrote about her nerve-wracking decision to get vaccinated on Instagram. Born with sickle cell anemia, Antwiwaa needs monthly blood transfusions. She worried about her low immunity and potential side effects.

“I was so nervous about getting vaccinated, and I shared that experience,” said Antwiwaa, who suffered nothing more than a temporarily sore arm. “It resonated with a lot of people.”

Save one: a vaccine skeptic who engaged Antwiwaa on safety concerns. Eventually, after a bit of back-and-forth, he got the shot.

“That made all the difference to me,” Antwiwaa said of agreeing to do the campaign.

This is what marketing firms like Denver-based The Idea Marketing, California-based Xomad and Chicago-based Res Publica Group want to see. They’re hired by health agencies to identify local influencers and coordinate messaging.

Xomad has developed a platform where influencers, content creators and health officials can rapidly fine-tune or change messaging to respond to events such as last spring’s pause in the use of Johnson & Johnson vaccines, new online misinformation or an expansion of age groups eligible for shots.

Rob Perry, Xomad’s CEO and founder, notes that a July study by the Knight Foundation and the city of San Jose found a direct correlation between a flurry of local influencer posts on Instagram and higher daily vaccination rates.

“Even in Silicon Valley they needed help reaching the immigrant, Black, Latino and Vietnamese communities,” Perry said. “No one’s bashing anti-vaxxers over the head. The last thing these trusted messengers want to do is polarize their followers. It’s their followers’ choice.”

Health officials say so-called “nano” and “micro” influencers, with fewer than 10,000 and 100,000 followers, respectively, are well-positioned to reach Generation Z and Millennials who get their news from social media.

The Oklahoma City County Health Department debuted the approach in late 2020, hiring Xomad to recruit local influencers to suggest ways their followers could celebrate stay-at-home holidays, agency spokeswoman Molly Fleming said. The campaign changed with the rollout of vaccines, and could change again with the advent of booster shots, as well as with non-COVID-19 issues such as a recent uptick in syphilis cases, she said.

One Oklahoma influencer is Pandora Marie, a 40-year-old street dancer and artist of Chicana, Chickasaw and Choctaw descent who has built a 30,000-strong Instagram following. She infuses her messaging with references to Native American culture and dance.

“When I started to share the COVID posts, I had people asking questions, which is always a good sign,” Marie said.

Fleming acknowledged it’s hard to measure how many vaccinations among 18- to 29-year-olds and minorities the strategy delivers.

But officials can see residents’ interactions with posts, “and when you’re spending public health dollars, that’s important,” she said. “If we pay for a billboard, we don’t know if you’ve seen it or if it changed your life at all.”

In Chicago, Cook County Health has worked with influencers such as McKinley Nelson, a young activist who uses basketball and entertainment to protect inner city youth from street violence. Its #MyShot campaign encourages 18- to 34-year-olds in Black and Hispanic communities to seek out vaccine information.

Soon to be called Life is Better Vaxxed, the campaign is one element in a multilayered communications strategy that includes vaccine information ads at gas stations and barber shops, and on coasters in bars, said Cook County Health spokeswoman Caryn Stancik.

“The mission, as it always has been for us, is equity,” Stancik said. “Our digital strategy targets individual neighborhoods and zip codes, and in these communities we layer in as many strategies as we can to help get people vaccinated and address misinformation.”

It appears to be helping, she said.

“I don’t want to say this alone will work,” Stancik said. “But people are coming to hundreds of pop-up local clinics based on digital word of mouth, so the information is resonating.”

Back in Rifle, Sgt. Cornejo built his Facebook following — way above the town’s roughly 9,700 residents — with videos largely centering on police work. He’ll strum his guitar and sing the occasional ballad, all of it endearing him to what he considers an extended family.

“I got COVID last year and shared that experience,” the 32-year-old said. “Is the vaccine going to protect you 100% of the time? No. But I compare it to wearing a seat belt — it doesn’t ensure nothing bad will happen, but your chances of saving your life are a lot higher.”