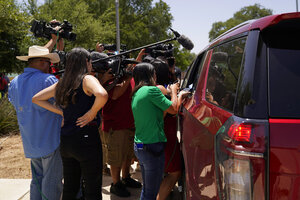 Media talks to the parents and other family members of shooting victim Uziyah Garcia after they picked up a copy of the Texas House investigative committee report on the shootings at Robb Elementary School, Sunday, July 17, 2022, in Uvalde, Texas. (AP Photo/Eric Gay)

SAN ANTONIO (KTSA News) — The fallout from a report issued Sunday on the police response to the Robb Elementary School massacre starts with the city’s acting police chief being placed on leave.

Uvalde Mayor Don McLaughlin says Lt. Mariano Pargas is on administrative leave a determination can be made on whether or not he was supposed to take command after the gunman entered the school and killed 19 students and 2 teachers.

The report from a Texas House committee revealed nearly 400 law enforcement officers were at the school, but there was no clear leadership on how to respond.

The shooter was eventually killed by a Border Patrol officer.

Mayor McLaughlin says the city agrees with the committee’s assessment but they will conduct an internal investigation into the city police department’s response.

The chief of the Uvalde ISD police department, who was one of the first to arrive at Robb Elementary, is also on leave.