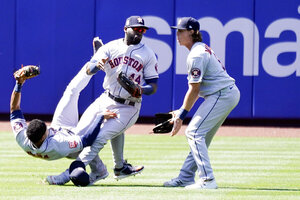 Astros left fielder Yordan Álvarez and shortstop Jeremy Peña were hurt when they collided in the eighth while running down Dominic Smith’s popup. Both called for the ball and as Peña caught the pop, and they hit each other in the face with their gloves. Álvarez was removed on a cart, sitting up, and Peña walked back to the dugout during the eight-minute delay.

Verlander (10-3) became the major leagues’ first 10-game winner, striking out six and walking one. The 39-year-old right-hander, a three-time Cy Young Award winner, has a 2.03 ERA this year in his return from Tommy John surgery.

Ryan Pressly pitched a perfect ninth for his 16th save in 19 chances, finishing the Astros’ second two-game sweep of the Mets in a nine-day span.

Taijuan Walker allowed four hits in a season-high 7 1/3 innings with three strikeouts and two walks. Walker was removed after 27 batters — he has not faced a hitter four times in a game since 2017 — and Edwin Díaz relieved to face Jose Altuve.

Castro began the day hitting .095 with one RBI in 74 at-bats. Kyle Tucker singled off Drew Smith (1-2) leading off the ninth, and with two outs Castro drove a slider into the right-field seats.

Mets third baseman Luis Guillorme had a dozen chances — two putouts and 10 assists. Boston’s Rafael Devers set the record for a nine-inning game with 14 against the Yankees in 2019.

Astros: RHP Luis Garcia (5-5) starts Thursday’s one-game series at home against the New York Yankees and RHP Luis Severino (4-2), a makeup of a game postponed by the lockout.