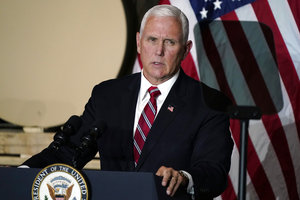 “Make no mistake about it: it’s a medical miracle,” Pence said about the vaccine, which began distribution this week. “I also believe that history will record that this week was the beginning of the end of the coronavirus pandemic.”

“The way through this challenging time is vigilance and a vaccine,” Pence said.

Pence, head of the White House Coronavirus Task Force, has taken on much of the day-to-day work on COVID-19, even as the president continues to focus publicly on the election. It’s not year clear when Mr. Trump, who has already had COVID-19, will receive the vaccine.

In a statement Wednesday night, the vice president said he and his wife, Karen Pence, are taking the vaccine publicly in order to instill confidence in it, as millions of Americans remain skeptical of the thoroughly tested products.

The vaccination took place in the Eisenhower Executive Office Building, the building that holds Pence’s office.

Pfizer’s vaccine is currently being distributed to high-risk health care workers, and Moderna’s vaccine is expected to reach arms before the end of the month as well.