Video appears to show jet on fire before crashing, killing 176 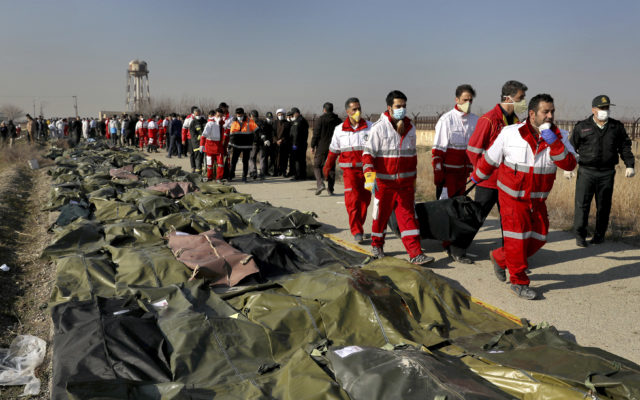 Rescue workers carry the body of a victim of a Ukrainian plane crash in Shahedshahr, southwest of the capital Tehran, Iran, Wednesday, Jan. 8, 2020. A Ukrainian passenger jet carrying 176 people crashed on Wednesday, just minutes after taking off from the Iranian capital's main airport, turning farmland on the outskirts of Tehran into fields of flaming debris and killing all on board. (AP Photo/Ebrahim Noroozi)

Unverified video from Iranian TV appears to show the Ukraine International Airlines flight on fire before it went down in a field just after takeoff in Iran, killing all 176 people on board. The video, which has not been authenticated by CBS News, appears to show the plane zig-zagging while descending before exploding into a fireball.

CBS News correspondent Kris Van Cleave reports the Boeing 737-800, which was not a 737 Max, was only three years old. Ukrainian International Airlines says the plane was in good working order and was flown by one of its most experienced crews.

Iranian officials are indicating a mechanical failure — possibly an engine fire — may have brought down Flight 752. Video of the crash site taken right after the plane went down shows flames and debris scattered across a field.

Crews have reportedly found the black boxes but Iran will not give Boeing access to them.

“We will not give the black boxes to the manufacturer (Boeing) and the Americans,” Iran Civil Aviation Organization head Ali Abedzadeh said, quoted by Mehr news agency.

Van Cleave reports that the Boeing 737-800 generally has a strong safety record. This morning Boeing called the crash a “tragic event,” saying “our heartfelt thoughts are with the crew, passengers and their families.”

AFP reports that under the rules of the International Civil Aviation Organization, of which Iran, Ukraine and the United States are all members, air crash investigations are led by the country where the accident occurred. However, according to aviation experts, the countries that are capable of analyzing black boxes are few — notably Britain, France, Germany and the United States.