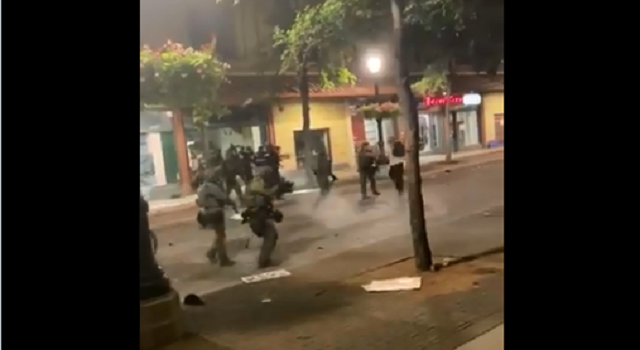 The theme of the rally at Travis park was  “Justice for George,” the African-American man whose death resulted in a murder charge against a white Minneapolis police officer.  It started at 5 pm Saturday at Travis Park and participants marched to the Public Safety Headquarters on Santa Rosa Street, and then back for another rally at Travis Park.

San Antonio Police Chief William McManus says “agitators” then moved to Alamo Plaza, and some “bad actors” in the crowd proceeded to smash windows of businesses and spray paint graffiti at dozens of locations around town.

“We had damage and graffiti at La Villita, the River Walk, a number of our parking garages, Hemisfair Park, and Visit San Antonio Visitors Center,” said Walsh.

There also was graffiti on the base of the Torch of Friendship on East Commerce and Alamo, as well as Travis Park.

He was pleased to see several volunteers showing up early Sunday to help city crews with the cleanup process.   Spurs star Lonnie Walker IV also helped wipe out graffiti, and distributed water to other volunteers.

Belinda Benavidez wanted to do something to help so she loaded up a couple of sheets of plywood and donated them to downtown businesses with shattered windows.  While she understands the anger over the death of George Floyd, she does not condone destruction of property.

“These  storefront businesses had nothing to do with it,” she told KTSA News.  “That’s not who we are, and was  the point?”

Mar Silver Jewelry on Broadway near Houston Street was just one of several business hit by rioters and looters.  Several businesses at the Shops at Rivercenter  also are having to clean up and make repairs.

Three San Antonio residents and  one man from Uvalde have  been arrested for rioting and other charges.  Two other were arrested for violation of the curfew and blocking a roadway.