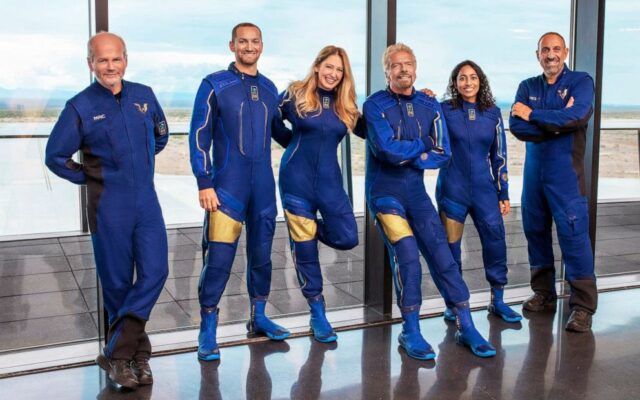 (NEW YORK) — Those who wish to spend a few minutes at the edge of Earth’s atmosphere will now have the chance — if they have $450,000 to spare.

The announcement comes on the heels of a successful test flight last month in which Branson and a crew flew to the edge of space in a mission dubbed Unity 22.

“Leveraging the surge in consumer interest following the Unity 22 flight, we are excited to announce the reopening of sales effective today, beginning with our Spacefarer community,” Virgin Galactic CEO Michael Colglazier said in a statement Thursday as the company announced second quarter earnings. “As we endeavor to bring the wonder of space to a broad global population, we are delighted to open the door to an entirely new industry and consumer experience.”

“Spacefarer community” refers to customers who already have put down a refundable deposit to be first in line to purchase tickets. The company said it intends to offer three consumer offerings for the private astronaut market: a single seat, a multi-seat package for couples or friends and a full-flight buyout. When the firm initially announced it was selling tickets to space a few years ago, the announced price was $250,000.

Branson’s July 11 suborbital flight took heat from critics for stretching the definition of space as the crew did not go above the Karman line (62 miles above Earth) that is defined by many agencies — but not all — as the boundary between the planet’s atmosphere and space.

Still, video from the trip showed Branson and his crew enjoying a few minutes of micro-gravity and the entire crew was presented astronaut wings during a news conference after their landing.

Branson’s role in much-viewed test flight was as a mission specialist, tasked with testing the customer experience.

“I think, like most kids, I have dreamt of this moment since I was a kid and honestly nothing can prepare you for the view of Earth from space,” Branson said after landing. “It’s just magical. I’m just taking it all in. It’s just unreal.”

Just nine days after Branson’s spaceflight, Amazon founder Jeff Bezos took a similar jaunt via a ride from his private space-faring company Blue Origin. Many saw the back-to-back billionaire spaceflights as ushering in a new era in space tourism that has been propelled by a budding commercial space industry dominated by the ultra-rich.