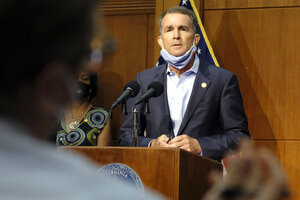 FILE - In this Sept. 1, 2020 file photo, Virginia Gov. Ralph Northam listens to a reporter's question during a press briefing inside the Patrick Henry Building in Richmond, Va. Northam and his wife have both tested positive for the coronoavirus. The governor’s office said in a statement Friday, Sept. 25, that Northam no symptoms while those of Pam Northam are mild.(Bob Brown/Richmond Times-Dispatch via AP)

RICHMOND, Va. (AP) — Virginia’s governor said he has developed mild symptoms of the coronavirus a little less than two weeks after he and the state’s first lady tested positive.

Ralph Northam said Monday that he had “a little bit of cold-like symptoms over the weekend” and had lost his sense of taste and smell, The Washington Post reported.

The Democratic governor said other than that, he felt fine. Northam, 61, said he learned on Sept. 25 that he and first lady Pam Northam had tested positive for COVID-19.

Northam, who is a physician, said he was alarmed that President Donald Trump was playing down the severity of the virus even after the president himself tested positive for it last week.

In a tweet Monday, Trump told the American people: “Don’t be afraid of COVID. Don’t let it dominate your life.”

Northam said Trump sent the wrong message. The governor pointed out that more than 200,000 Americans have died and more than 7 million people across the globe have been infected.

“It’s irresponsible to make a statement like that,” Northam said.

Northam is a former military doctor who served on the staff at Walter Reed National Military Medical Center. He noted that Trump “has access to the best medical care, medications, treatments other people don’t have access to.”