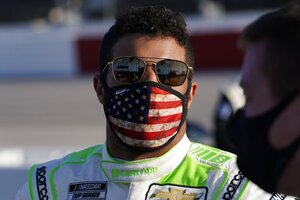 CHARLOTTE, N.C. (AP) — Bubba Wallace is leaving Richard Petty Motorsports at the end of the season.

NASCAR’s only full-time Black driver informed RPM of his decision Thursday. He will finish the final nine races in Petty’s famed No. 43.

“This was not an easy decision as I have nothing but the utmost respect for Richard Petty and his family, but I believe it’s time for someone else to take over the reins of the No. 43,” Wallace said in a social media post.

Wallace thanked RPM for giving him the opportunity to start his Cup Series career, saying “I’ve grown so much as a driver and a person since joining them.” He added that he hopes to “finish the 2020 season on a high note.”

RPM says it will announce a new driver “in the near future.”

Wallace is in his third season driving for Petty. He has a career-best five top-10 finishes this season and is ranked a career-best 23rd in the Cup standings.

Wallace has taken an active role in pushing for racial inclusion and equality, helping spur NASCAR to ban the Confederate flag at its races earlier this year. He parlayed that into several sponsorship deals that have been negotiated in a way that Wallace could take them with him if he left RPM.