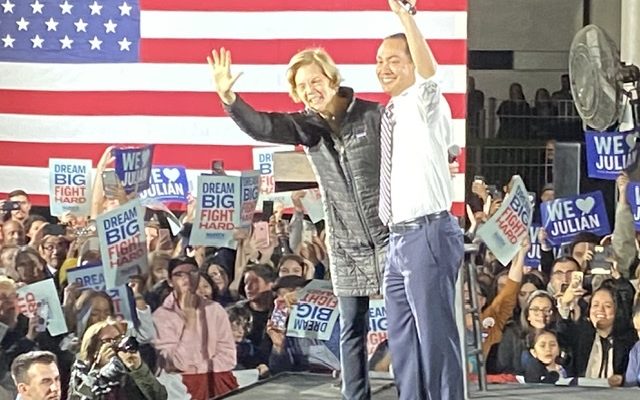 She was introduced by former San Antonio mayor and ex-HUD Secretary  Julian Castro.

“I couldn’t ask for a better partner in that fight than Julian Castro,” she said as the crowd cheered.  Some were holding up placards that read “I heart Castro.”

What was touted by Warren’s campaign as a town hall was actually more of a rally with  a few questions from the audience  at the end.

Warren shared her story about growing up poor in Oklahoma, and her family’s struggles to keep from losing their home.

“I wasn’t born a politician, but I was born a fighter,” she said.

She talked about fighting the influence of money in Washington and corruption with “the biggest anti-corruption plan since Watergate.”

“Let’s fight back against the influence of money, let’s get some structural change in our economy, let’s protect our democracy because if we do those three things, we can start to do it all,” Warren said. “We can start to do real immigration reform.”

Warren says everyone who runs for federal office should reveal their income tax returns.

Warren also reiterated her push for a wealth tax and she explained how it would work.

“Your first 50 million would be free and clear,” she said. But there would be a 2-percent wealth tax on anything above that.

Warren said that would pay for things like universal child care and public education.

If elected, Warren vows to expand legal immigration  and create a path for citizenship for those who are already here.

“I am fighting back because I believe in you. Fighting back is an act of patriotism,” Warren said.

Those words resonated with Kirsten Mangin, a local teacher.

Julie Henneberry says she voted for Warren Thursday before the rally.

“She’s very commanding.  I like how she’s handled the other debaters on stage.  I like what she stands for.  She gets things done, too, “Henneberry told KTSA News.

Outside Sunset Station, David Treibs from Fredericksburg was armed with an AR pistol as he waved a flag that read “Come and Take it.” He and other protestors stood across the street and shouted during Warren’s rally.

Johnny Rico wasn’t allowed into the venue because he was wearing a gorilla suit and a cowboy hat.  He told KTSA News he was taking a break from his job at  Wok This Way to support his favorite candidate for president.

Following the rally, Warren took time to pose for selfies with hundreds of supporters who waited in a long line.