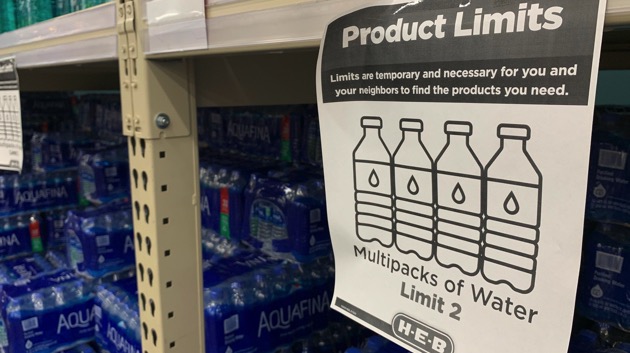 A "Product Limits' sign is seen next to water shelves in a supermarket in Houston, Texas following winter storm Uri that left millions without power and caused water pipes to burst, on February 20, 2021. - Texas authorities have restored power statewide bringing relief after days of unprecedentedly frigid temperatures, but millions were still struggling on February 20, 2020 without safe, drinkable water. (Photo by Francois PICARD / AFP) (Photo by FRANCOIS PICARD/AFP via Getty Images)

(JACKSON, Miss.) — Hundreds of thousands of residents in the South are still dealing with the after effects of two devastating winter storms as cities struggle to provide drinking water.

Residents in Jackson, Mississippi, are still under a boil water alert, and some residents still do not have running water after the back-to-back winter storms last month wreaked havoc on the city’s water system.

While significant progress was made Sunday on restoring pressure to the system, and water for flushing toilets was restored on Monday, the city’s water system does not have a time table on when a full restoration will be complete, ABC Jackson affiliate WAPT reported. Water was previously expected to be fully restored by the end of last week, Charles Williams, the city’s director of public works, told the Jackson City Council on Tuesday.

On Wednesday, Mississippi Gov. Tate Reeves dispatched the National Guard and more tanker trucks to Jackson to aid in the water crisis.

Jackson resident Terri Hall told WAPT that water has only been dripping from her faucet and that what little comes out is mixed with sediment. She has been without water for 10 days.

“We can’t bathe in this, because if there is microbes in the water, they can enter your mouth, eyes, and nose, and can’t wash dishes because you don’t want to ingest that way,” she said.

In Texas, more than half a million people are still under boil water advisories, according to the Texas Commission on Environmental Quality. At one point, more than 14.4 million people, about half of the state’s population, were affected by weather-related water disruptions.

Although the boil water advisory was lifted in Houston on Feb. 21, thousands of homes are still without water after pipes burst in freezing temperatures, Houston Mayor Sylvester Turner announced on Sunday.

“They still do not have water, so there is a tremendous need,” Turner said.

About 10,000 people showed up to a distribution center Sunday to pick up cases of water and meal kits, Turner said.

Turner has requested more supplies from FEMA so licensed plumbers can continue to repair the pipes, according to the release.

Business agent Rick Lord told ABC Houston station KTRK that when he recently went to a local hardware store, the plumbing section was empty, describing it as “Black Friday on steroids in the plumbing aisle.”