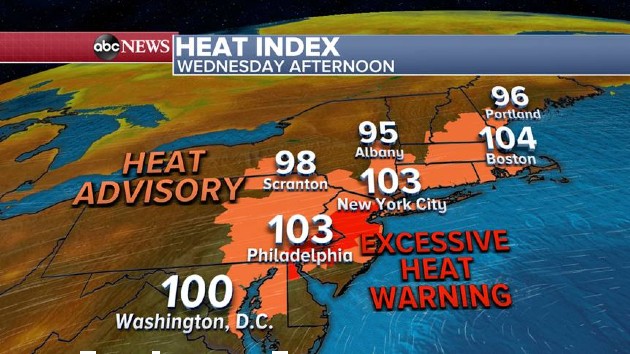 Heat is a silent killer. On average, more people die from heat than any other severe weather, including tornadoes, hurricanes or flooding, according to the National Weather Service.

In Seattle’s King County, at least two people, both in their 60s, have died from the heat, The Seattle Times reported, citing the King County Medical Examiner’s office.

The dangerous heat also struck Canada. Since the heat wave began, British Columbia saw “a significant increase in deaths” — about 100 more than usual — and it’s suspected that the weather was a contributing factor, the chief coroner for British Columbia, Lisa Lapointe, said in a statement Tuesday.

The record heat is over in Seattle and Portland, Oregon. But on Tuesday, Spokane in eastern Washington hit a new record high temperature — 109 degrees.

The heat will continue for eastern Washington on Wednesday.

The heat is also spreading into Montana, where temperatures will get close to 100 degrees over the next few days.

Meanwhile, a scorching heat wave has invaded the Northeast, where 11 states from Maine to Maryland are under heat alerts.

More record highs are possible Wednesday with temperatures in the upper 90s and the heat index over 100. By Wednesday afternoon it may feel like 103 degrees in Philadelphia and New York City.

Severe storms will then move into the Northeast in the late afternoon with damaging winds posing the biggest threat. In northern New England, there’s a chance for large hail and an isolated tornado.