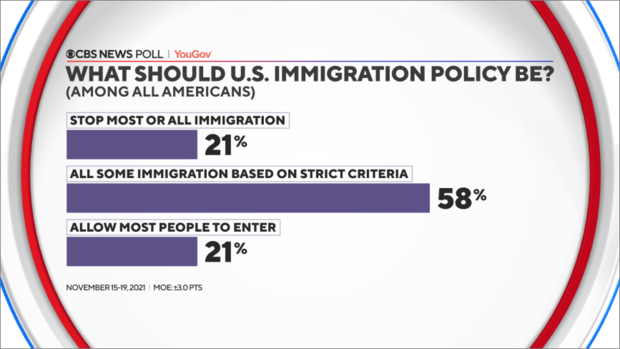 Few issues spark debate more than immigration, because people connect it to so many aspects of society: from economics and culture, to law and resources, as well as to what one believes about people who are immigrating in the first place.

So considering all that, what do people want U.S. policy generally to be right now? Let’s look at what’s behind each of three broad views: those who say they’d stop most or all immigration now (this group is one in five Americans — 21%); those who would allow some immigration, based on strict criteria (this is by far the largest of three, a majority 58% of Americans, though exactly what that criteria ought to be is itself a matter for discussion, which we’ll cover below); and those who would allow a lot of immigration, including for most or all who want to enter the U.S. (this is another 21%, counterbalancing the most restrictive group.)

The people giving these responses differ somewhat in how they see both immigrants and immigration’s impact — here’s more on each:

The largest group of Americans, those who say they would allow some immigration, starts with a mainly positive impression of who immigrants are, at least in one sense: about eight in 10 of them see immigrants as generally hard-working, and most say they’re part of what “makes America special.” In terms of economic impact, most say immigrants “fill jobs Americans won’t do,” but for these respondents, it’s not all clear-cut. A sizable four in 10 also feel they have the effect of taking wages away from U.S. citizens. There are still nearly half of them who say that some immigrants are looking for “handouts and welfare.”

So within this “some immigration” group, there’s a host of criteria that these Americans use as priorities for allowing immigrants, including those who already have family in the U.S., those fleeing persecution and those with special work skills.

Demographically, they look a lot like the overall population in terms of race and age, as might be expected for such a large group. They see some ties to immigration, in that almost half of them describe their family history as either recent or previous generations having been immigrants.

People who would stop most or all immigration

The most restrictive group is composed of the one in five Americans who would stop most or all immigration to the U.S. They appear motivated in their views by both economics and what they see as cultural concerns, having both negative views of who immigrants are in terms of their impact on society — with their overarching view that immigration makes American society worse — as well as immigrants’ economic impact.

Unlike the other two groups, more of them say it matters to them which countries immigrants do come from. Although they want to stop most immigration, when asked about differences by region, they are more likely to want immigration decreased or disallowed from the Middle East and Mexico, than from Europe.

More broadly, then, they overwhelmingly disagree with the idea that immigration is part of what makes America special. If there is to be any other criteria for allowing immigrants in, it’s whether someone goes through the legal process.

They are not as apt to consider themselves, or their immediate past generations, to have been immigrants. Most of them either describe their families as either having always been in the U.S., or aren’t sure of the history. They are as a group older than the U.S. adult population as a whole, and are predominantly White without college degrees. Those among them who turned out in 2020 voted overwhelmingly for Donald Trump (but four in 10 didn’t vote at all.) They mostly identify as conservative, and are a mix of Republicans and independents, but much more likely to identify as Republican than voters overall.

People who would allow most or all

And the group that says the U.S. should allow most who want to enter: this group (21% of Americans) would especially prioritize allowing those seeking asylum and fleeing persecution. A defining element of this group, in contrast to the other two, is that this “allow most” group sees the immigration issue as shaped by “what the U.S. stands for” to a greater degree than they see it as being about economics and about jobs. They also overwhelmingly believe immigration is part of what makes America special.

On that economic front, this group does have a very positive view of immigrants’ impact and overwhelmingly believes immigrants fill jobs Americans won’t do, and very few of them see immigrants as looking for handouts.

One demographic point that stands out about this group is that they’re younger overall, and more likely to hold college degrees than the other two groups, and more likely than the U.S. population overall. This may help explain their relatively different concerns about jobs and immigrants’ impact. This group is mostly White but less so than the population as a whole, with relatively greater proportions of Black and Hispanic Americans than the other groups. Politically, this group is disproportionately liberal; and a majority of them identify as Democrats. Nine in 10 of them voted for Joe Biden, a mirror image of the most restrictive group.

Along with these differences between the three general approaches, there is some commonality across them all, including that most people in each set emphasize that as a criteria for entry, they’d have immigrants who do come to the U.S. do so through the U.S. legal process.

This CBS News/YouGov survey was conducted with a nationally representative sample of 2,058 U.S. adult residents interviewed between November 15-19, 2021. This sample was weighted according to gender, age, race, and education based on the U.S. Census American Community Survey, and the U.S. Census Current Population Survey, as well as 2020 presidential vote. The margin of error is ±3.0 points.