What to know about Jessica Rosenworcel, who was nominated to become first woman to lead FCC 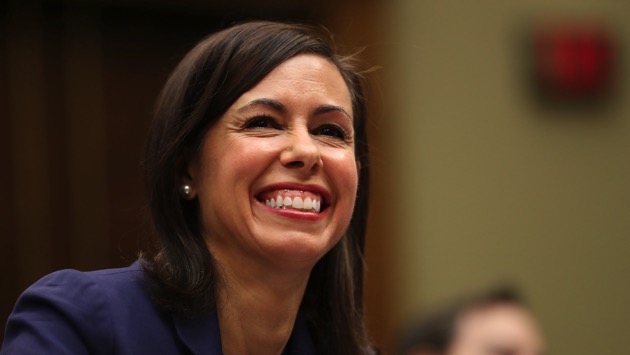 WASHINGTON, DC - DECEMBER 05: Federal Communication Commission Commissioner Jessica Rosenworcel testifies before the House Energy and Commerce Committee's Communications and Technology Subcommittee in the Rayburn House Office Building on Capitol Hill December 05, 2019 in Washington, DC. All five of the FCC commissioners testified before the subcommittee, which is tasked with oversight of the commission. (Photo by Chip Somodevilla/Getty Images)

(WASHINGTON) — Jessica Rosenworcel is in line to make history as the first woman to head the Federal Communications Commission, after President Joe Biden announced on Tuesday his intent to officially nominate her as a commissioner and designate her as chair of the agency tasked with regulating telecommunications technology.

Rosenworcel has served as acting chair of the FCC since January, but would need to be confirmed by the Senate to assume her new role as chair in an official capacity. She has been a commissioner since 2012.

Her nomination could also mean the end to Trump-era clampdowns on net neutrality, as Rosenworcel has been a fierce advocate for an internet that is “open and available for all.”

“The internet should be open and available for all. That’s what net neutrality is about,” Rosenworcel said in an October 2020 statement. “It’s why people from across this country rose up to voice their frustration and anger with the Federal Communications Commission when it decided to ignore their wishes and roll back net neutrality.”

She added that she views the rollbacks to net neutrality as a way to “make it easier for broadband companies to block websites, slow speeds, and dictate what we can do and where we can go online.”

During her brief stint as acting chair, Rosenworcel has focused on closing the digital divide at a time when the COVID-19 pandemic resulted in an abrupt dependence on internet access for millions of Americans in order to go to school or do their jobs.

Rosenworcel’s policy approach and the historic nature of her nomination has also been lauded for representing the needs of women in a sector where they remain underrepresented in leadership positions.

“Every issue is a gender issue, even broadband access,” Rosenworcel wrote in a July op-ed she co-authored with Valerie Jarrett, a former senior adviser to President Barack Obama.

The op-ed cited how 31% of women have worried about paying their broadband bill during the pandemic, and delved into the issues working mothers especially faced when schools shuttered for in-person learning. The piece promoted the Emergency Connectivity Fund, which aims to support students who need internet access at home in order to participate in virtual schooling during the health crisis.

The White House also recognized her inclusive approach to telecommunications policy, especially for low-income communities, in a statement Tuesday.

“During her time at the agency, she has worked to promote greater opportunity, accessibility, and affordability in our communications services in order to ensure that all Americans get a fair shot at 21st century success,” a statement from the White House announcing her nomination Tuesday said. “From fighting to protect an open internet, to ensuring broadband access for students caught in the Homework Gap through the FCC’s Emergency Connectivity Fund, to making sure that households struggling to afford internet service stay connected through the Emergency Broadband Benefit program, she has been a champion for connectivity for all.”

She has also led a fight against illegal robocalls, the statement added, and worked to enhance consumer protections.

Rosenworcel previously worked as a senior communications counsel for the Senate Committee on Commerce, Science, and Transportation, and before that practiced communications law after graduating from the New York University School of Law.

The mother of two is originally from Hartford, Connecticut, but currently lives in Washington, D.C., with her husband.

In addition to announcing Rosenworcel’s nomination, the Biden administration said Tuesday that it plans to nominate fellow net neutrality advocate Gigi Sohn as an FCC commissioner. If both the new nominees are confirmed, it would give the FCC a Democratic majority. If their confirmations are delayed until Rosenworcel’s term expires at the end of the year, Republicans would hold a majority on the commission — setting up a potential political showdown over their confirmations.