What will the Texas voting law do? 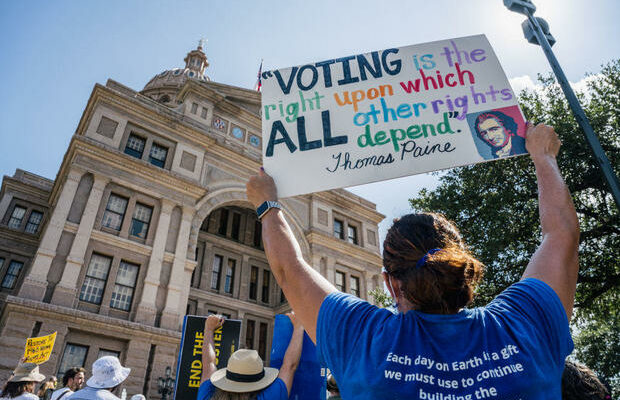 People display signs during the Georgetown to Austin March for Democracy rally on July 31, 2021, in Austin, Texas. Getty Images
Six months after the legislation to overhaul Texas elections was introduced, the Legislature passed the sweeping bill, despite the bitter opposition of the state’s Democrats.
Democrats staged two separate walkouts during the spring and summer that stalled GOP efforts to pass the bill. They say the measure, which is still to be signed by Governor Greg Abbott, includes unnecessary provisions that may make it harder for some voters, particularly voters of color and disabled voters, to cast a ballot. Republicans counter that the bill will shore up faith in the election system and make it harder to cheat.

There’s been no proof of widespread election fraud in the 2020 election, including in Texas.

The bill, SB 1, is closely aligned with the final version of SB 7, which the Legislature failed to pass in May because of the first Democratic walkout. Abbott will ultimately be signing a version that does not include the most controversial provisions proposed: banning early voting on Sunday before 1 p.m. and lowering the standard for overturning election results.

Here are some of the provisions that are included:

The bill says “no voter may cast a vote from inside a motor vehicle” unless they meet certain requirements for curbside voting.

More than 127,000 people cast ballots this way and an analysis by the Texas Civil Rights Project found more than half of the voters who used drive-thru voting in Harris County in November 2020 were Black, Hispanic or Asian.

The bill targets another practice that Harris County used during the 2020 election: 24-hour voting. SB 1 requires early voting hours to start no earlier than 6 a.m. and end by 10 p.m. Voters who are still in line when the polls close would be allowed to cast their ballot that night.

The Texas Civil Rights Project found that 56% of Harris County voters who took advantage of the late-night hours were Black, Hispanic or Asian.

There are new ID requirements for mail voting applications and returning a mail ballot. Voters who want to vote by mail will have to provide a driver’s license or personal ID number, the last four digits of their Social Security number or a statement that they lack either of those forms of ID.

An application to vote by mail will need to be signed “using ink on paper.” Electronic or photocopied signatures will be prohibited.

Texas already has strict requirements governing who may vote by mail: voters must be 65 years or older, disabled, out of the county on Election Day and early voting period or in jail but otherwise eligible.

Those who cancel a mail voting application after their ballot is sent to them are only allowed to cast a provisional ballot in-person if they choose to not complete their mail ballot.

The measure provides protections for poll watchers, including allowing them to sit or stand close enough “to see and hear” election workers conducting their activities. And poll watchers cannot be “denied free movement” in a location where they are serving.

Any election officer who “intentionally or knowingly refuses to accept a watcher for service” — when doing so is required — could face criminal punishment. Offenders may be charged with a Class A misdemeanor, punishable by a fine of up to $4,000 and up to a year in jail.

An amendment passed by the House last week removed a provision that required election judges to warn poll watchers that they were violating a law before they may remove them.

The bill also mandates training for poll watchers before they work and requires poll watchers to sign an oath that says they will “not disrupt the voting process or harass voters.”

In 2020, Harris County tried to send absentee ballot applications to all registered voters even though only some voters would be eligible to vote by mail. The Texas Supreme Court blocked the county from sending the applications before the general election, but the county did send applications to voters who were at least 65 years old earlier in the year.

SB 1 prohibits election officials or public officials from sending absentee ballot applications “to a person who did not request the application.”

Any public or election official who violates this provision is subject to a state jail felony.

Monthly checks for non-citizens on the voting rolls

The bill requires the Secretary of State’s office to work with the Texas Department of Public Safety each month to verify that everyone on the voter rolls is a citizen. It’s an attempt to root out non-citizens who may have registered to vote when they were either applying for or renewing a driver’s license. There were legal challenges when Texas tried to do something similar in 2019.

The bill sets new requirements, and potential criminal penalties, for people who assist voters with casting their ballot.

Those assisting voters will be required to take an oath swearing that they will only help with reading or filling out a ballot and that they “did not pressure or coerce the voter into choosing me to provide assistance.”

Anyone besides an election officer who assists a voter must complete a form with their name, relationship to the voter and whether that person received “any form of compensation” from a candidate, campaign or political committee. If someone helps a voter cast a mail ballot, that information needs to be provided on the envelope. People who drive seven or more voters to the polls must complete a form containing their name, address and whether they are providing assistance to a voter.

Voters who make a mistake — like forgetting to sign a mail ballot certificate or omitting residency information, or if their signature is questioned — may fix that defect to ensure their ballot counts.