Whataburger to set up shop at San Antonio International Airport 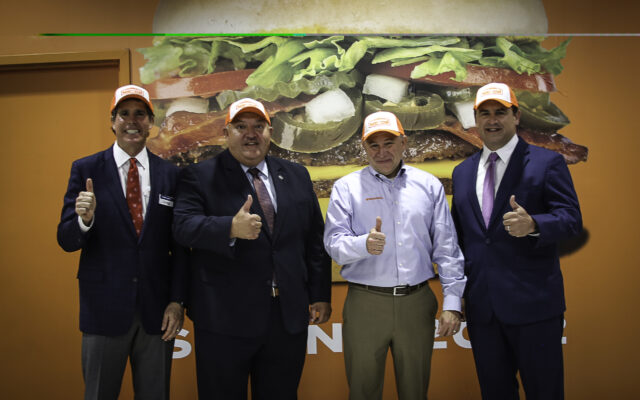 SAN ANTONIO (KTSA News) — While some people are still fuming over the Chik-Fil-A at San Antonio International Airport debate, there will soon be a familiar favorite available for travelers as they make their way through the terminal.

SAT and Whataburger made the announcement today the Texas-favorite will be available in Terminal A for passengers.

“We are excited to welcome Whataburger to the airport family. We listened to what our customers wanted and they asked for the famous orange and white stripes of Whataburger,” said Jesus H. Saenz, Jr., Director of Airports at the San Antonio Airport System.

The San Antonio-based burger chain will open up at the airport in 2022. The restaurant will be run and managed by Paradies Lagardère who oversees concessions in the terminal.

“Bringing Whataburger to our hometown airport is a great way to serve fans and introduce our freshness and big flavors to visitors,“ said, Ed Nelson, President and CEO at Whataburger. “We’re thankful to city leaders and Paradies Lagardère for making it possible.”

The announcement comes more than three years after the city council banned Chick-Fil-A from opening shop at SAT. The recommendation for the iconic chicken restaurant to move in was suggested by city staff, but was rejected by the city council with claims the company’s values did not align with the city’s over accusations of “anti-LBGTQ behavior” by councilman Roberto Trevino.

The March 2019 decision by the city council spawned at least 18 months of intervention by the State, national commentary on the matter and a “Save Chick-Fil-A” bill signed into law.

Don Morgan contributed to this report.

Paxton: City of San Antonio is not cooperating with Chick-fil-A airport concessions investigation