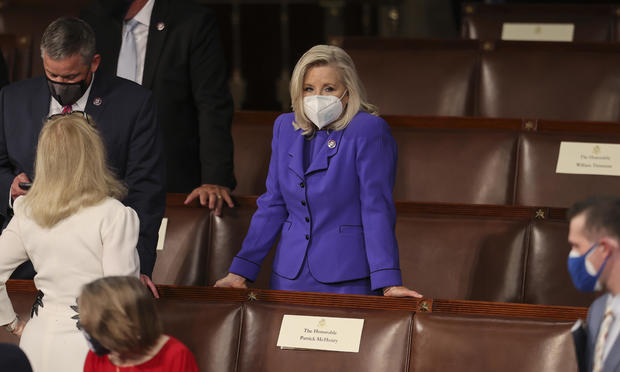 U.S. House Republican Conference Chairperson Rep. Liz Cheney (R-WY) waits for U.S. President Joe Biden to deliver his first address to a joint session of the U.S. Congress in the House chamber of the U.S. Capitol April 28, 2021 in Washington, DC.  JONATHAN ERNST / Getty Images
House Republicans plan to vote Wednesday on whether to strip Representative Liz Cheney of her leadership post in the House as a result of her criticisms of former President Donald Trump and his baseless claims that the 2020 election was stolen from him.

The highest-ranking two Republicans in the House want Cheney to be replaced with Representative Elise Stefanik, a staunch Trump ally, as GOP Conference chair. Cheney won’t give up the spot willingly, and she plans to force the conference to vote on whether to remove her, according to a source familiar with her plans.

If the conference chooses to remove Cheney, as House Republican leadership expects it to, the vote will trigger an overhaul of the GOP’s messaging, further solidifying it as the party of Mr. Trump.

What is a conference chair?

The House Republican Conference is simply the organizational body for all the GOP members in the House of Representatives. The conference chair is responsible for scheduling meetings where members can discuss issues and legislation within their own party. But the chair also has a major role in party messaging, both coordinating media availabilities and interviews with members and speaking on behalf of the caucus.

Cheney is at risk of losing her job as conference chair because she has repeatedly criticized Mr. Trump and rejected his unfounded theories about the election, while other members of House GOP leadership and some members have stood behind the former president and his claims.

She began publicly breaking with McCarthy over how the party should handle Trump after pro-Trump rioters stormed the Capitol January 6. She called for Trump to be impeached for his role in the event and later voted to impeach him, while McCarthy urged members to move forward.

For her impeachment vote, Cheney faced a similar attempt to unseat her as conference chair in early February. At the meeting, McCarthy strongly advised members against unseating Cheney as well as removing Representative Marjorie Taylor Greene from her committee assignments for promoting conspiracy theories and apparently endorsing violence toward Democratic politicians. In both cases, the conference voted overwhelmingly not to take action. Just 61 Republicans voted to remove Cheney from her post, while 145 voted for her to stay in the vote by secret ballot.

But days later, the GOP in Cheney’s home state of Wyoming voted overwhelmingly to censure her for voting to impeach Mr. Trump.

In late April at House Republicans’ annual retreat in Florida, the fracturing grew between Cheney and pro-Trump members when Cheney told reporters “our elected leaders are the ones who are in charge,” as opposed to Mr. Trump.

Since, Cheney has continued to challenge Mr. Trump’s benefit to the party as well as his baseless claims that Democrats cheated in the 2020 election.

“While embracing or ignoring Trump’s statements might seem attractive to some for fundraising and political purposes, that approach will do profound long-term damage to our party and our country,” Cheney wrote in a Washington Post op-ed last week.

Almost immediately, McCarthy and Scalise began taking steps behind the scenes to unseat Cheney from her conference chair post. Since then, both of them have said they support Cheney’s removal and replacement with Stefanik.

“Each day spent relitigating the past is one day less we have to seize the future,” McCarthy wrote to GOP members Monday. “These internal conflicts need to be resolved so as to not detract from the efforts of our collective team. Having heard from so many of you in recent days, it’s clear that we need to make a change.”

How will the vote work?

Representative Virginia Foxx, a House veteran who’s facing a far-right primary challenger in her reelection battle, is expected to introduce a resolution to remove Cheney from the job when the conference meets Wednesday, according to sources familiar with the plans .

The vote is expected to be done by secret ballot or by voice and decided by a simple majority, as was the previous one, according to two sources familiar with the process. Because there are 218 Republican members in the House, at least 110 would need to vote against Cheney to remove her.

If the attempt to oust her is successful, the conference would then need to elect a replacement chair. That election would likely take place at a later conference meeting, leaving time for a candidate forum in between, according to sources familiar with the plans.

Like all conference meetings, both of these events would take place behind closed doors.

Who could be the next GOP Conference chair?

Stefanik, a four-term congresswoman from upstate New York, is the current frontrunner to be the next GOP Conference chair if Cheney loses the job.

Stefanik was an establishment Republican who worked for former President George W. Bush and former House Speaker Paul Ryan. During the 2016 election, Stefanik was so reluctant to embrace Mr. Trump that she referred to him as “my party’s presidential nominee,” rather than by his name. But by the first impeachment inquiry into the former president a year and a half ago, Stefanik had become one of his staunchest allies on the Hill. On Monday, he repaid her for her loyalty.

“The House GOP has a massive opportunity to upgrade this week from warmonger Liz Cheney to gifted communicator Elise Stefanik. Elise has intelligence, an endorsement from American Patriot Brandon Judd and the National Border Patrol Council, she has an A+ from the NRA, and she loves our Veterans,” Mr. Trump said in a statement.

Stefanik also has a history of helping other members win election and reelection. Her Elevate PAC donated to nearly 50 Republican women running for House spots the last election cycle.

Still, Stefanik’s moderate history worries some in the GOP as it coalesces around the former president’s ideals. The Conservative Club for Growth PAC last week said in a statement that Stefanik has among the most liberal voting records in the House GOP. “House Republicans should find a conservative to lead messaging and win back the House Majority,” the group said.

To quell similar concerns among the most conservative members, Stefanik plans to meet with the right-wing House Freedom Caucus after the vote on Cheney, according to sources familiar with the plans.  She has also told GOP members she plans to serve only one term as conference chair, according to a GOP aide.”While embracing or ignoring Trump’s statements might seem attractive to some for fundraising and political purposes, that approach will do profound long-term damage to our party and our country,” Cheney wrote in a Washington Post op-ed last week.

But Stefanik’s reaction to the January 6 riot at the Capitol stands in stark contrast to Cheney’s. While Cheney called for Mr. Trump’s impeachment in the days that followed, Stefanik was unfazed. She returned to the House chamber after the event and unsuccessfully objected to the election results in Pennsylvania.

Rebecca Kaplan contributed to this report.