What’s next for Cuomo after sexual harassment report? 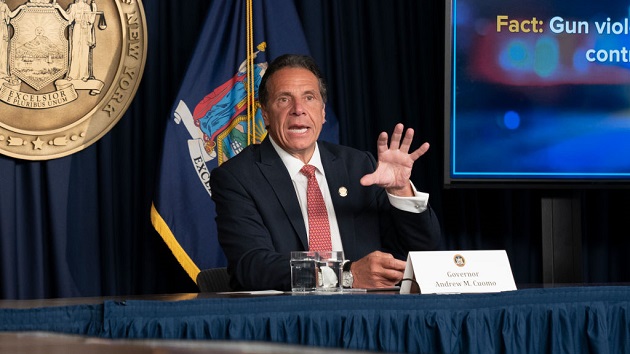 (NEW YORK) — New York Gov. Andrew Cuomo vehemently has refused to step down after the release of a report that found he sexually harassed multiple women and created a hostile work environment.

The blistering report, by New York Attorney General Letitia James, was released on Tuesday after a four-month investigation. Cuomo has denied all allegations of sexual misconduct.

Here’s how the political saga could continue:

While James said that the state attorney’s probe would have no criminal referral, district attorneys in Manhattan, Albany, Westchester County and Nassau County have now requested the investigation’s materials to look into the accusations, which allegedly took place in those jurisdictions and could lead to criminal charges.

Albany District Attorney David Soares said Tuesday his office is reviewing the report’s findings to see whether criminal charges should be filed and encouraged more victims to come forward. He called the matter “developing” and said his office would be reviewing the documents.

On Wednesday, the Westchester County district attorney’s office also asked for the investigative materials to conduct a criminal investigation into Cuomo’s alleged conduct.

“As this is an ongoing investigation, we will not comment further at this time,” Westchester District Attorney Mimi Rocah said in a statement.

Manhattan District Attorney Cy Vance also said in a statement that the office requested materials pertaining to incidents that occurred in Manhattan.

Acting Nassau County District Attorney Joyce A. Smith slammed the report’s findings as “deeply disturbing” and said the office requested documents for incidents that occurred in Nassau County to “investigate any potential crimes.”

In a recorded video, Cuomo responded to the report on Tuesday by again denying the allegations, saying that “the facts are much different than what has been portrayed.”

Cuomo has fielded calls to resign, including from President Joe Biden, formerly a close political ally.

The governor insisted, yet again, that he “never touched anyone inappropriately or made inappropriate sexual advances.” His video message displayed a series of photos of him kissing his parents and other figures, male and female, on the cheek as he said that such touching and kissing were a part of his culture and nature.

The State Assembly in Albany said it’s moving “expeditiously” to wrap up up its own impeachment investigation into the sexual harassment allegations, which began in March.

Speaker Carl Heastie said in a statement Tuesday, after the Assembly had gathered to discuss the report, “It is abundantly clear to me that the Governor has lost the confidence of the Assembly Democratic majority and that he can no longer remain in office.”

The Assembly has the power to bring impeachment charges against Cuomo. To impeach the governor, a majority of Assembly members must vote to impeach, after which the case would move to the impeachment court, where a two-thirds vote would be required to convict and oust Cuomo.

James, the state’s attorney general, also is investigating whether Cuomo broke the law in having members of his staff help write and promote a book on his leadership in the pandemic, for which he was set to rake in more than $5 million, The Associated Press reported. Federal investigators also are probing the state’s handling of data on nursing home deaths during the pandemic. The State Assembly is also investigating Cuomo for the book deal and nursing home deaths.

Despite the probes, Cuomo could still run for a fourth term as governor if he’s not impeached. He’s already begun to fundraise for the 2022 race, and no Democratic challenger has been announced for the primary. U.S. Rep. Lee Zeldin and Andrew Giuliani may run as Republicans.