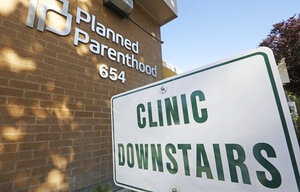 FILE - In this Aug. 21, 2019, file photo, a sign is displayed at Planned Parenthood of Utah in Salt Lake City. The Biden administration is beginning to undo a Trump-era ban on clinics referring women for abortions, a policy directive that led to Planned Parenthood leaving the federal family planning program. (AP Photo/Rick Bowmer)
▶ Watch Video: CBS News Live
Washington — The bombshell decision by the U.S. Supreme Court to overturn its landmark 1973 Roe v. Wade ruling on abortion rights has upended 50 years of precedent and handed state lawmakers across the country the power to restrict or ban abortion.The result will be a patchwork of laws that vary based on where a person lives.

Thirteen states have so-called “trigger laws” on the books, in which abortion will swiftly be outlawed in most cases. In Friday’s ruling, the court upheld a Mississippi law banning abortion after 15 weeks of pregnancy.

Justice Samuel Alito wrote in the majority opinion, “Roe was egregiously wrong from the start. … It is time to heed the Constitution and return the issue of abortion to the people’s elected representatives.” Roe had held that the Constitution protected a woman’s right to an abortion before the point at which a fetus is viable outside the womb, typically around 24 weeks of pregnancy.

A number of Republican-led states have already passed laws that would outlaw abortions at various stages in a pregnancy. Democratic-led states, meanwhile, have acted to protect abortion rights. And the state-level action on the issue of abortion has taken place not only in state legislatures across the country, but also in their own courts.

An analysis by the Guttmacher Institute, a research organization that supports abortion rights, found that 23 states have laws on the books, as of May 1, that could be used to restrict abortion rights in absence of Roe.

Here is where the states stand on abortion access:

Thirteen states have so-called “trigger” laws that would restrict abortion with Roe overturned: Arkansas, Idaho, Kentucky, Louisiana, Mississippi, Missouri, North Dakota, Oklahoma, South Dakota, Tennessee, Texas, Utah and Wyoming. Some of the states’ laws would go into effect immediately following a Supreme Court decision, while others would kick in after 30 days.

In several cases, the bans take effect once the state attorney general or another official certifies that the Supreme Court’s decision reverses Roe, but that could take just days following the court’s decision.

Lawmakers in Nebraska attempted to pass a trigger ban this year, but it failed in the state senate in April.

Anti-abortion rights advocates have been pressing states to enact legislation banning the procedure once an embryonic heartbeat is detected, after about six weeks of pregnancy. Eleven states have done so, though nearly all of the measures have been blocked: Georgia, Idaho, Iowa, Kentucky, Louisiana, Mississippi, North Dakota, Ohio, Oklahoma, South Carolina, Tennessee and Texas.

Only the Texas law is in effect, as the Supreme Court last year declined to block it from being enforced. The measure has a novel enforcement mechanism that tasks private citizens, not state officials, with enforcing it by filing lawsuits in state court against anyone who performs an abortion or “aids or abets” them. Its design has inspired bills in other GOP-led states that mirror the Texas measure.

In 2019, Missouri Gov. Mike Parsons, a Republican, signed into law a bill that made abortions illegal after eight weeks of pregnancy. A federal district court blocked the measure from taking effect, and a three-judge panel on the 8th U.S. Circuit Court of Appeals declined to lift the lower court’s injunction. The full 8th Circuit heard arguments in the challenge to the law brought by Planned Parenthood last year.

In Florida, a 15-week ban was signed into law in April and goes into effect July 1. Mississippi’s 15-week ban, passed in 2018, was at the center of the dispute that led to Roe being overturned.

Louisiana’s 15-week measure was signed into law in 2018 by Democratic Gov. John Bel Edwards, though it will only take effect if Mississippi’s law is upheld.

In Montana, Gov. Greg Gianforte, a Republican, signed a law outlawing abortions after 20 weeks last year, but a state court judge blocked the measure and two other abortion laws from taking effect in October.

In addition to having newer laws on the books that impose limits on when in a pregnancy abortions can be performed, nine states have laws enacted before the 1973 decision in Roe that were never removed.

In Michigan, though, Gov. Gretchen Whitmer, a Democrat, preemptively sued 13 county prosecutors with abortion clinics in their jurisdictions in an effort to circumvent the state’s 1931 pre-Roe abortion ban.

States with the right to an abortion enshrined in their constitutions

The highest courts in nine states have recognized the right to an abortion under their respective constitutions, according to the Center for Reproductive Rights. The state constitutional protections ensure abortion will remain legal even without Roe.

Some of these states, such as Florida, have passed laws restricting access, while others, like Montana, have had abortion restrictions temporarily blocked.

Iowa had been on that list, but the state Supreme Court ruled in June that the right to an abortion is not protected under the state’s constitution, reversing a decision by the court just four years ago. Iowa’s GOP-controlled legislature and governor have signaled they will move to further restrict abortion access.

In Kansas, an amendment allowing for the regulation of abortion goes before voters in August, and pro-abortion rights groups in Michigan also launched a ballot drive to enshrine the right to an abortion in the state’s constitution.

States with laws protecting the right to an abortion