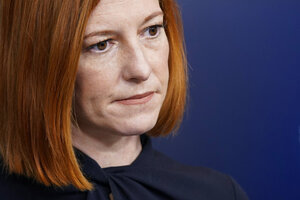 The White House downplayed a statement by the U.S. Secret Service that nearly $100 billion at minimum has been stolen from COVID-19 relief programs, saying Wednesday that the estimate is based on old reports.

White House press secretary Jen Psaki, when asked to comment on the figure, said, “There is no new research, data or analysis of fraud here.”

The Secret Service told The Associated Press on Tuesday that the estimate is based on Secret Service cases and data from the Labor Department and the Small Business Administration.

An agency spokesperson said Wednesday that they were not amending a statement on their website, but did add a clarifying note to explain the figure is based on reports from the Labor Department and the Small Business Administration and that the Secret Service was not producing a new report.

“There isn’t a correction to be made, we just explicitly posted on the release’s webpage the same info we discussed yesterday,” Justine Whelan, a spokesperson for the Secret Service, wrote in an email Wednesday.

Psaki said “there was just an adding up” of two old reports of well-known challenges involving small business loans and unemployment insurance payments. “It’s also important to note that even those two older analyses combined payments that include mistakes in over and under payments but it was a reference to two older IG reports.”

The Secret Service didn’t include COVID-19 fraud cases prosecuted by the Justice Department in its estimate Tuesday.

The COVID-19 relief programs were set up to help businesses and people who lost their jobs due to the pandemic.

Roy Dotson, the new national pandemic fraud recovery coordinator for the Secret Service, discussed the fraud in an interview Tuesday. While roughly 3% of the $3.4 trillion dispersed, the amount stolen from pandemic benefits programs shows “the sheer size of the pot is enticing to the criminals,” Dotson said.

Most of that figure comes from unemployment fraud. The Labor Department reported about $87 billion in unemployment benefits could have been paid improperly, with a significant portion attributable to fraud.

The Secret Service said it has seized more than $1.2 billion while investigating unemployment insurance and loan fraud and has returned more than $2.3 billion of fraudulently obtained funds by working with financial partners and states to reverse transactions. The Secret Service says it has more than 900 active criminal investigations into pandemic fraud, with cases in every state, and 100 people have been arrested so far.

The Justice Department said last week that its fraud section had prosecuted over 150 defendants in more than 95 criminal cases and had seized over $75 million in cash proceeds derived from fraudulently obtained Paycheck Protection Program funds, as well as numerous real estate properties and luxury items purchased with the proceeds.

One of the best-known programs created through the March 2020 CARES Act, PPP offered low-interest, forgivable loans to small businesses struggling to meet payroll and other expenses during pandemic-related shutdowns.

The Pandemic Response Accountability Committee brings together agents from its 22 member inspectors general to investigate fraud involving a variety of programs, including the PPP. They have led or participated in pandemic fraud investigations leading to 818 arrests, 1,134 indictments, and 391 convictions, the committee said Tuesday.

Law enforcement early in the pandemic focused on fraud related to personal protective equipment, the Secret Service said. Authorities have now prioritized the exploitation of pandemic-related relief because the federal funding through the CARES Act attracted the attention of individuals and organized criminal networks worldwide.

Dotson, who is the Secret Service’s assistant special agent in charge of the agency’s field office in Jacksonville, Florida, said that while they can’t stop fraud, they can prosecute those that need to be prosecuted and recover as much fraudulent pandemic funds as they can.