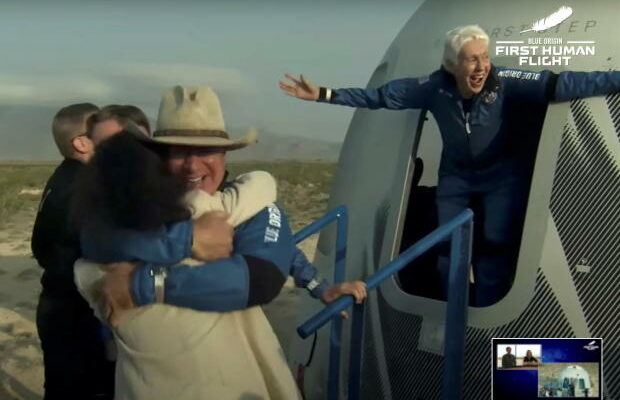 Jeff Bezos and Wally Funk emerge from their capsule after their flight aboard Blue Origin's New Shepard rocket near Van Horn, Texas, July 20, 2021 in a still image from video.  BLUE ORIGIN
Wally Funk has spent her life among the clouds. She had her first flight lesson at age nine, became a licensed pilot at 17 and has logged more than 19,000 flying hours.
But her lifelong dream of going to space eluded her until now. At the age of 82, Funk became the oldest person to travel to space when she went up on Blue Origin‘s New Shepard rocket on Tuesday.

Alongside her was Jeff Bezos, Bezos’ brother, Mark, and Oliver Daemon, an 18-year-old who has became the youngest person ever in space.

Funk’s pathway to the stars was not an easy one. In the 1960s, while America’s first astronauts were going through NASA’s rigorous training, Funk was part of the Mercury 13, a group of 13 women who went through the same uncompromising exams.

“We had no idea what we were going through. We didn’t know where it was taking us,” Funk said.

She recently described to CBS News’ Michelle Miller some of the painful and strenuous tests the group of women went through. “X-raying all over your body, every bone, every tooth, sticking water into your ears. I had to drink radioactive water,” she said.

The women of Mercury 13 met — and often surpassed — the results of the men. She said despite all the struggle, she knew she would become an astronaut and go to space. But the women would never get their chance. NASA required astronauts to be military test pilots, and the military at the time didn’t allow women to fly.

Decades later, American women did find their place at NASA, including retired astronaut Nicole Stott, who has spent more than 100 days in space.

But for Wally Funk, the dream never died. On Tuesday, it was realized.

“I’m going. That is my quest. … I love flying, that’s my job, that’s what I love. And I’m not a quitter,” Funk said ahead of the spaceflight.