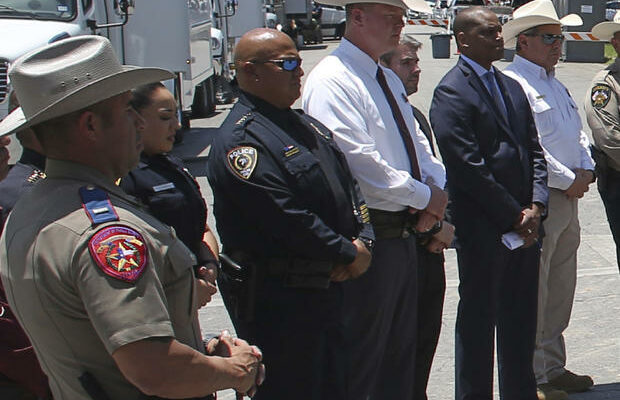 ▶ Watch Video: Families of Uvalde victims speak out, demand answers at district meeting
Families of those who lost their lives during the school shooting in Uvalde, Texas, are demanding accountability from law enforcement after the Austin American-Statesman published a photo of armed police in a hallway, outside the classrooms where 19 children and two teachers were killed.

The images reviewed by the Austin American-Statesman show a timestamp taken nearly one hour before the gunman was stopped.  It’s more evidence in a growing investigation that indicates police waited before stopping the gunman, despite having rifles and at least one ballistic shield.

The evidence is being presented to a public Texas Senate hearing in Austin on Tuesday.

“We were failed by Pete Arredondo,” said Brett Cross, the uncle and guardian of victim Uziyah Garcia. “He failed our kids, teachers, parents, and city, and by keeping him on your staff, y’all are continuing to fail us.”

“My mom died protecting her students. But who was protecting my mom?” said Lyliana Garcia, the daughter of Irma Garcia, one of the two teachers who died trying to protect their students.

“At the age of 16, an age when a girl needs her parents the most, I’m trying to fill the shoes of both my beloved mother and father the best I can,” she said.

Despite the calls for Arredondo’s firing, no public action has been made. Arredondo previously told the Texas Tribune that he didn’t consider himself the person in charge during the shooting, and assumed someone else had taken control of law enforcement’s response.

Angel Garza, who lost his 10-year-old step-daughter, Amerie, in the shooting, said he has lost faith in law enforcement as more details about the shooting unfold.

“I had officers from every department look me in the eye and ask me to trust them. How are we supposed to continue our lives here knowing that those people that are supposed to protect us let down our family?” said Garza.

A committee in the Texas State House is currently investigating the police response to the shooting.