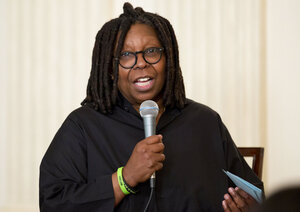 NEW YORK (AP) — The actress Whoopi Goldberg has apologized for saying the Holocaust was not about race, comments that caused a backlash.

She made the initial comments on ABC’s ‘’The View”’ program on Monday morning. Her apology came in a tweet hours later.

“On today’s show, I said the Holocaust ‘is not about race, but about man’s inhumanity to man.’ I should have said it is about both. As Jonathan Greenblatt from the Anti-Defamation League shared, ‘The Holocaust was about the Nazi’s systematic annihilation of the Jewish people — who they deemed to be an inferior race.’ I stand corrected,” Goldberg said.

“The Jewish people around the world have always had my support and that will never waiver. I’m sorry for the hurt I have caused. Written with my sincerest apologies, Whoopi Goldberg,” she said.

The hosts on “The View” were discussing a Tennessee school board’s banning of “Maus,” a graphic novel about the Nazi death camps during World War Two. The board cited nudity and profanity as its reasons for banning the book, which has won several literary awards, including a Pulitzer Prize.