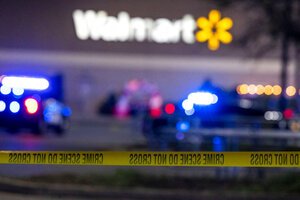 Thanksgiving is a day of universal gratitude, originally for the harvest and preceding year’s good fortune.

It’s still one of the few things almost all of us recognizes, not withstanding the rancor of a few woke historians who insist the Pilgrims were genocidal invaders. Sounds like somebody didn’t get their organic cranberry sauce. For most, Thanksgiving is uncomplicated. Being grateful feels right and is right.

But when you look at recent events like the shooting at the Wal-Mart in Chesapeake, or the Colorado Spings nightclub attack, we seem to have lost the simple, human, innate ability to grieve loss in a united, shoulder-to-shoulder way.

Because, before you say anything else about these or similar incidents, they are losses. People who were family, friends, loves, coworkers and familiar faces were taken from us, cruelly, suddenly and innocently.

Outside of their immediate communities, we as a nation are forgetting how to be united in grief, a unity that is supportive and supporting, and ultimately, healing.

No sooner does the blood start running in 2022 America than we have to have the “battlefield lines” drawn: it’s the right, the left, the Democrats, the Republicans, it’s this leader or that organization, who “created the climate” or “gave the greenlight”. Man, I am sick of this refrain. Aren’t you?

There’s never any proof offered, or needed, and it’s almost as though these crazed killers (for that’s what they almost always are) had no agency.

To believe that, you would have to believe that no human being has ever lost his mind, grown hateful, nursed a grudge. It has never happened.

Instead, they tell us,  the killers are activated, as if by remote control, and sent out to slaughter.

Now, you know and I know those last two sentences are utter nonsense.

To be clear, no criminal investigation of a mass murder is complete without the motive being sought, and usually, found. However, you and I, and the other 330 million of us, are not the investigators. We are the fellow citizens of the dead, wounded, and those mourning.

What happens to us, as people and as Americans, if we cannot universally recognize grief and loss, and want only to support each other.

Who and what is retraining us to fight a mini-war over every tragedy, instead of uniting in loss the way we will on Thanksgiving, in gratitude?