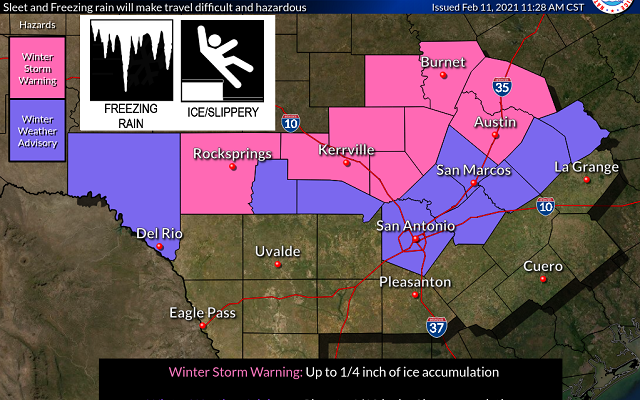 “We’re not expecting any snow today in San Antonio,” said meteorologist Keith White with the National Weather Service. “Everything should remain in the form of rain, freezing rain or sleet.”

However, it’s a different story in portions of the Hill Country and other areas north of Bexar County where a Winter Storm Warning is wreaking havoc with freezing rain and sleet.

Ice accumulations up to 1/4 inch are making driving conditions hazardous.

Major accidents involving dozens of vehicles on icy roads have been reported in Austin and the Fort Worth area.    Five people were killed and several others were injured in a massive pile up near Fort Worth Thursday morning.

“We could see some isolated to scattered showers, especially in areas north of San Antonio into the Hill Country.  That could include some additional light freezing rain or sleet,” said White.

After midnight Sunday into Monday morning is when it’s expected to get messy  with a wintry mix.

“We’ll run the gamut from rain to freezing rain and sleet, and potentially snow,” said White. “It’s too early to say anything about accumulations or where to expect the worst conditions, but we’re continuing to keep an eye on it.

He says the heaviest precipitation is expected after midnight Sunday until around noon Monday.

“After that, the coldest temperatures we’ve seen in several years will move in. Right now we’re anticipating Tuesday morning lows in San Antonio in the mid  to upper teens,” said White.

It’ll be colder in the Hill Country where temperatures could drop into the single digits.