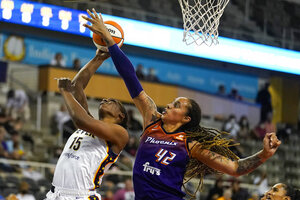 NEW YORK (AP) — The WNBA playoff chase may come down to the final day of the regular season on Sept. 19.

Six teams have already clinched postseason spots, although where they will finish in the standings is still up for grabs.

Connecticut remains the top seed, riding a nine-game winning streak. The Sun haven’t lost since the season resumed from the Olympic break and hold three-game lead on third place Minnesota with five games to play. Connecticut has a 1 1/2 game margin over second place Las Vegas.

While it would take a major collapse for the Sun to fall out of the top two seeds, Las Vegas has been beset by injuries and illness. Center Liz Cambage was diagnosed with COVID-19 last week despite being vaccinated. It’s unclear when she’ll return. Reigning two-time sixth woman of the year Dearica Hamby has been sidelined with a sprained ankle.

That’s left the door open for Minnesota. Seattle and Phoenix to potentially take the No. 2 seed and earn one of the two coveted double byes to the semifinals.

The Lynx have won five straight games although they are dealing with their own injury issues. Damiris Dantas is lost for the season with a Lisfranc injury in her right foot and Layshia Clarendon has been sidelined with a leg injury.

The Storm have faltered lately, looking tired since the Olympic break. The team dropped three straight before rallying to beat New York. Seattle has had some time to rest with its last game five days ago.

Phoenix has equaled Connecticut’s nine-game winning streak to vaunt into contention to earn at least one bye in the playoffs. The team’s star trio of Brittney Griner, Skylar Diggins-Smith and Diana Taurasi have all taken turns leading the team during the current run.

While those five teams are jockeying for byes, Chicago should finish in sixth. The Sky have three games to play and hold a 2 1/2 game lead on seventh place Dallas.

The Wings, Liberty, Mystics and Sparks are all in contention for the final two playoff spots.

1. Connecticut (21-6): The Sun have four of their five remaining games against teams that are under .500 in the standings.

2. Las Vegas (20-8): The Aces have continued to get strong contributions off the bench from Kelsey Plum, who is averaging 19.3 points in her last three games.

3. Minnesota (18-9): The Lynx have potentially the easiest schedule of the top teams with three of their five remaining games against Indiana, including a pair at home.

4. Seattle (19-10): The Storm have dropped three consecutive games, including a pair at home to Chicago. They had a grueling road trip coming out of the Olympic break and have looked tired. The good news for Seattle is its remaining four games are spread out over the next few weeks.

5. Phoenix (18-10): The Mercury have been one of the league’s hottest teams, winning nine consecutive games, including three in a row on the road. Brittney Griner sprained her ankle in one of the victories over New York in the game’s final 70 seconds. She missed the second victory over the Liberty and coach Sandy Brondello expects her 6-foot-8 center back soon.

6. Chicago (15-14): The Sky clinched a playoff berth with a victory against Las Vegas over the weekend. Chicago seems to be peaking at the right time.

7. Dallas (12-16): The Wings may be in the best position to reach the postseason with three of their final four games at home. The schedule includes contests against New York and Los Angeles, which Dallas is battling for playoff spots. The Wings will have to overcome the loss of center Isabelle Harrison to COVID-19. She contracted the virus last week despite being vaccinated.

8. Washington (10-17): Coach Mike Thibault said the injury bug that’s hit the team all season is the worst he’s seen in his nearly 50 years of coaching. Ariel Atkins and Theresa Plaisance are the only players on the roster who have played in every game. Players have missed 72 games due to injury with Elena Delle Donne, Tina Charles, Myisha Hines-Allen, Alysha Clark and Natasha Cloud being sidelined at some point this year.

9 New York (11-18): The Liberty have lost six straight, but have time to get ready for the final three games as they don’t play again until Saturday. The Liberty most likely will have to win two of its final three games to get into the playoffs with contests against Dallas, Connecticut and Washington. Their only the game remaining is against the Mystics.

10. Los Angeles (10-18): The Sparks have dropped five in a row and don’t have a favorable schedule with games against Connecticut, Seattle, Atlanta and Dallas remaining.

11. Atlanta (7-20): The Dream earned their first win since June 29 with a victory over Dallas on Sunday. It snapped an 11-game losing skid. Atlanta can play spoiler down the stretch with games against Phoenix, Washington, Los Angeles and Connecticut. The Dream also faces Indiana which could help decide who has the best chance to win the draft lottery.

12. Indiana (6-21): With the exception of the third quarter in both games, the Fever played Phoenix tough in a pair of games over the holiday weekend. Indiana was outscored 60-19 combined in the two games.

The WNBA announced its top 25 players of all-time in honor of the league’s 25th anniversary on Sunday. The “W25” has 10 current players, including Sue Bird, Diana Taurasi, Sylvia Fowles, Candace Parker and Breanna Stewart. Former stars Lisa Leslie, Tamika Catchings, Katie Smith and Sheryl Swoopes are among 15 retired players selected by a panel of media members and women’s basketball pioneers and advocates.

It’s the fourth time the league, in its 25th season, has produced a list of its top players. Bird, Catchings, Cynthia Cooper, Yolanda Griffith, Lauren Jackson, Leslie, Smith, Swoopes and Tina Thompson also were recognized on each of the previous anniversary lists.

PLAYER OF THE WEEK

Brittney Griner of Phoenix was voted as the Player of the Week after she averaged 20.3 points, 6.7 rebounds and 2.3 assists.to help the Mercury win all three of its games. Other players receiving votes included Kayla McBride of Minnesota and Jonquel Jones of Connecticut.

GAME OF THE WEEK:

Liberty at Wings, Saturday. This game could go a long way to determine the playoff fate for one of these two teams.