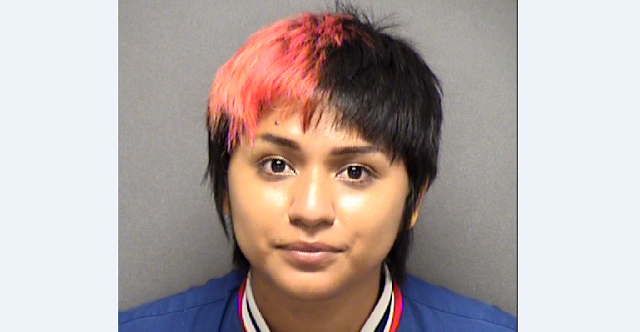 Rebecca Rojas arrested for allegedly vandalizing cars and flashing a laser at a deputy during a protest Aug. 26, 2020/Photo-BCSO

SAN ANTONIO (KTSA News) – A woman accused of vandalizing vehicles and pointing a  laser at a deputy during a protest this week has been arrested.

A deputy watching the crowd from the top floor of a parking garage told investigators that  25-year-old Rebecca Rojas spray painted the letter ACAB (All Cops are B*****ds) on the tailgate of a truck driven by a detention deputy.   She’s also accused of flashing a green laser at a deputy in a parked patrol vehicle and spray painting the bumper of a marked unit.  Rojas was arrested Thursday on a charge of criminal mischief causing $2,500 to $30,000 worth of damage.

The vandalism occurred during protests outside the Bexar County Jail following the death of 31-year-old Damien Daniels who was shot by deputies.

Bexar County Sheriff Javier Salazar said Daniels was armed with a gun and a knife when he got into a struggle with deputies who responded to a call concerning a suicidal man at a West Bexar County home.   Sheriff Salazar says deputies tried talking to Daniels, but a struggle ensued.  When Daniels, a military veteran, refused to drop the gun, they shot him.  Three deputies involved are on administrative leave as the investigation continues, but Salazar is defending their actions.