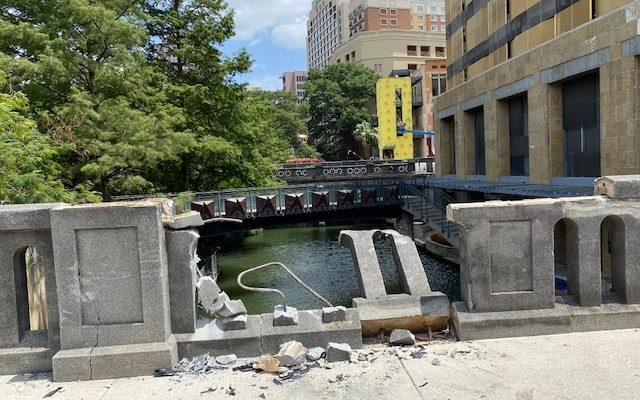 SAN ANTONIO (KTSA News) -A woman has been arrested after stealing an SUV from a guest at the Drury Plaza Hotel downtown and crashing into a concrete bridge over the San Antonio River Walk.

Officer Alisia Pruneda  says  a guest at the hotel on S.St.Mary’s at Market Street had loaded her vehicle and was waiting for some people when a woman jumped into the passenger seat and demanded a ride shortly after 10 this morning. When the suspect refused to get out, the driver grabbed a gun that was in  her vehicle and a struggle ensued.  The suspect gained control of the weapon, but some people came to help the driver get out and they were able to get the gun away from the suspect.

The suspect drove away in the SUV but  didn’t get very far.  She went the wrong way on Market Street, drove over a sidewalk and crashed into a concrete bridge, knocking out a large chunk of it. Pieces of concrete fell into the San Antonio River , but there were no pedestrians or barges operating in the area when the accident occurred.

A San Antonio police officer in the area rushed to the scene and arrested her.  They recovered the weapon, and the owner of the SUV was taken to a hospital for treatment of minor injuries .

Barricades have been placed in front of the damaged bridge on Market Street just a couple of blocks away from the Henry B. Gonzales Convention Center, and caution tape also was placed around the River Walk area below.