Woman gives birth on flight to Hawaii with help of doctor, NICU nurses 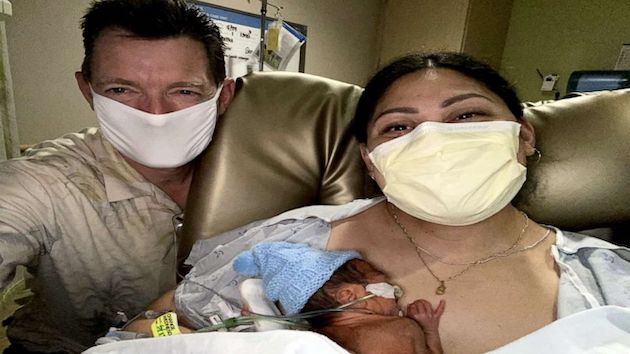 (HONOLULU) — On Wednesday, somewhere over the Pacific, a woman who didn’t know she was pregnant gave birth to a baby boy.

Lavinia “Lavi” Mounga was flying from Salt Lake City to Honolulu on April 28 for a vacation when she gave birth to her son, Raymond.

Luckily, a doctor from Hawaii and three neonatal intensive care unit nurses from North Kansas City Hospital were also on board the almost seven-hour Delta flight to help Mounga deliver her baby.

“We were about halfway through the flight, and we heard someone call out for medical help,” North Kansas City Hospital NICU Nurse Lani Bamfield said in a release. “I went to see what was going on and see her there holding a baby in her hands, and it’s little.”

Bamfield and the other neonatal nurses cared for Mounga and Raymond for three hours until the flight landed in Honolulu. They were then transported to Kapiolani Medical Center for Women & Children in Honolulu.

“I don’t know how a patient gets so lucky as to have three neonatal intensive care nurses onboard the same flight when she is in emergency labor, but that was the situation we were in,” Hawaii Pacific Health family medicine physician Dr. Dale Glenn, who was on board the flight, said in a statement. “The great thing about this was the teamwork. Everybody jumped in together, and everyone helped out.”

He described how challenging it was to care for both patients in such a small confined space like an airplane. They also had to improvise on tools, using shoelaces to tie and cut the umbilical cord and an Apple Watch to monitor the baby’s heart rate.

Glenn and the team of nurses visited with Mounga and Raymond at the hospital two days after the surprise birth.

“We all just teared up,” North Kansas City Hospital NICU Nurse Mimi Ho said in the hospital release. “She called us family and said we’re all his aunties, and it was so great to see them.”

Mounga has since been discharged, but Raymond will remain in the NICU until he’s ready to go home, according to Hawaii Pacific Health.