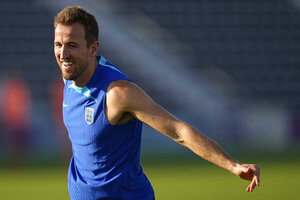 England's Harry Kane takes part in drills during a training session at Al Wakrah Sports Complex on the eve of the group B World Cup soccer match between England and Wales, in Al Wakarah, Qatar, Monday, Nov. 28, 2022. (AP Photo/Abbie Parr)

DOHA, Qatar (AP) — The American and Iranian soccer teams are the only ones putting politics aside as the sides meet in a match to determine if either nation continues in this World Cup.

The two met at the 1998 World Cup in France when memories of the 1979 Islamic Revolution were still fresh for both countries. Even the White House was talking about the game as then-President Bill Clinton and Secretary of State Madeline Albright used the match to discuss the possible resumption of diplomatic relations with Iran, which had been cut off since the 1979-81 hostage crisis.

The State Department a month before that game called Iran the world’s “most active″ sponsor of terrorism, so nerves were frayed for both nations. And just a week ahead of kickoff, a French television station broadcast the 1991 film “Not Without My Daughter,″ a movie based on the true story of an American woman who escaped Iran with her daughter against the wishes of her Iranian husband.

The Iranians claimed the broadcast was a purposeful insult.

Now the teams head into their final Group B match Tuesday and the United States can only advance with a win. Iran would advance with a win, and perhaps a draw depending on the results England’s match against Wales.

But headed into one of the most politically charged matches — rematch in this case — in tournament history, the conversation was again not centered on winning or losing.

In Monday’s pre-match news conference, United States captain Tyler Adams and coach Gregg Berhalter were asked about a variety of social and political subjects that had nothing to do with what happens on the field. Adams was asked to defend the U.S.’s treatment of Black people and chastised for pronouncing the opponent “Eye-ran” instead of “E-ran.”

Berhalter was questioned about U.S. immigration and Naval policy, and also apologized for the U.S. Soccer Federation’s decision to strip the emblem of the Islamic Republic from Iran’s flag in a since-deleted social media post.

Iran coach Carlos Queiroz was asked about the social media post, which led the governing body of Iranian soccer to demand FIFA expel the United States from the tournament. He said he did not intend to use the controversy as motivation.

“If after 42 years in this game as a coach I still believe that I could win games with those mental games, I think I did not learn nothing about the game,” Queiroz said. “We have solidarity with the humanitarian causes all over the world, whatever they are or who they are. If you talk about human rights, racism, kids that die in schools with shootings, we have solidarity to all those causes, but here our mission is to bring the smiles for the people at least for 90 minutes.”

TWO AT A TIME

Tuesday marks the final day of play for both Groups A and B, and it is the first day of simultaneous kickoffs.

The practice of starting two games at the same time began in 1986, four years after a match dubbed the “Disgrace of Gijon.” The match was scandalous because West Germany and Austria both knew that a German win by one or two goals would advance both teams at the expense of Algeria.

After Germany scored an early goal, neither team tried to score again.

British rivals meet at the World Cup when Wales faces England with animosity high between the nations over a 2016 video.

Footage went viral six years ago of Wales players celebrating wildly when England was eliminated from the European Championship in a humiliating defeat. Wales had lost to England in the group stage and was ecstatic to see its British neighbor lose.

The Three Lions only need a draw to move into the knockout stage, but Wales must win to have a chance at advancing in its first World Cup since 1958.

Wales drew 1-1 with the United States in its opening match, then lost to Iran 2-0 and has only one point in Group B.

“We have shown time and time again when you write us off we will prove people wrong,” Wales defender Chris Mepham said.

England is a World Cup favorite and opened strong with a 6-2 win over Iran, but looked flat in a goalless draw against the United States. England coach Gareth Southgate has been criticized for conservative play and not starting winger Phil Foden.

The Manchester City midfielder has played only 19 minutes in the first game. No matter who starts for England, the goal is to send Wales home and avenge being mocked in 2016.

“I don’t think it takes a genius to see how we’ve improved since 2016. For me it feels like a completely different team,” England forward Marcus Rashford said. “We’ve come on so much. We’ve learned a lot about ourselves along the way.”

Enner Valencia scored three goals in Ecuador’s first two World Cup games but his health is in question heading into a match against Senegal.

The 33-year-old striker was carried off the field on a stretcher in a 1-1 draw with the Netherlands with an injured right knee. Valencia also sprained his left knee in Ecuador’s opening win over Qatar.

It’s concerning to Ecuador because Valencia has carried the team and scored its last six World Cup goals. Valencia is trying to become only the second player to score seven straight goals for a single nation at the World Cup.

Senegal, meanwhile, is considering lineup changes for the must-win Group A game.

Senegal lost to the Netherlands 3-1 in its opening match, and only a win against Ecuador will advance the team to the knockout stage for the first time since reaching the quarterfinals in 2002 in its first World Cup.

Senegal has never beaten a South American opponent at the World Cup, losing to Uruguay in 2002 and Colombia in 2014. Senegal has struggled without star Sadio Mané.

Senegal is ranked No. 18 in the world and won the African Cup of Nations title in February.

Qatar will play its final match of the World Cup on Tuesday when it faces the Netherlands in a game with nothing on the line for the host nation.

Qatar was eliminated after its second loss in group play to become only the second host to fail to advance to the knockout stage. South Africa in 2010 was the first to be eliminated in group stage but still had a chance to advance in its third and final group match.

Qatar also was the first host nation to lose the opening World Cup game in tournament history, a 2-0 defeat to Ecuador. Qatar also lost to Senegal 3-1 and was the first team eliminated.

“We are a country with 6,000 football licenses,” Qatar coach Felix Sanchez said. “And I think these players have achieved a great deal over the last years. And now we need to be aware that to compete at this level, we are still lagging behind.”

The Netherlands is on the verge of reaching the knockout stage with a draw after failing to qualify for the World Cup four years ago. The Dutch could even get through with a loss if Ecuador beats Senegal in the other Group A match.

The Netherlands is on a 17-game unbeaten run since coach Louis van Gaal returned to lead the team for the third time.