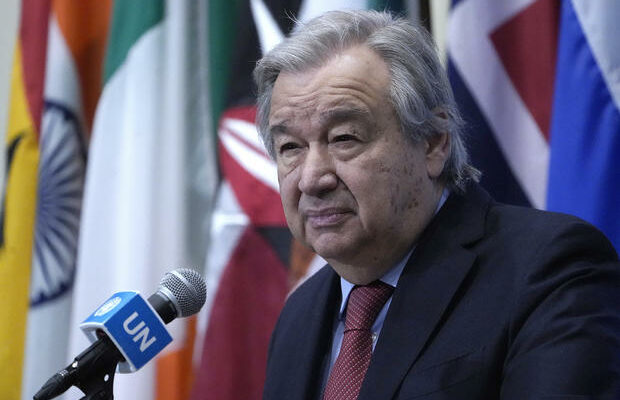 United Nations — “We are facing the highest number of violent conflicts since 1945,” U.N. Secretary-General Antonio Guterres said Wednesday at a U.N. meeting that should have been about the world body’s mandate of building peace.

He called the war in Ukraine “a catastrophe shaking the foundations of the international order, spilling across borders and causing skyrocketing food, fuel and fertilizer prices that spell disaster for developing countries.” Guterres also told diplomats that vital resources “are being diverted away from badly needed support to address the sharp increases in hunger and poverty resulting from COVID-19.”

The gloomy picture that the world faces, delivered by the U.N. chief — who is no stranger to conflict, since he served as the head of the U.N. refugee agency for a decade — was remarkable in its assessment of world conflicts.

“Around the world, we are seeing military coups and seizures of power by force,” Guterres said, in a message that conveyed the frustration he has expressed in the past month over the war in Ukraine.

His remarks came a day after a U.N. Security Council meeting where the head of the World Food Program, David Beasley, warned that the war in Ukraine could be a “catastrophe” for food security around the world. Ukraine had been a major supplier of grain for export until the war interfered.

“It’s hard to believe that before the Ukraine crisis, that things could get any worse around the world,” Beasley said. “We were already, because of fuel prices, food prices, shipping costs, beginning to cut rations for millions of children and families around the world in countries like Yemen, where we had just cut 8 million people down to 50% rations and now, we’re looking at going to zero rations,” Beasley said, also citing Niger, Mali and Chad.

The number of refugees from Ukraine has just passed the 4 million mark, and one in four Ukrainians are now either out of the country or displaced within its borders.

The U.N. Secretary-General said Wednesday that in many ways world conditions are in the worst place they’ve been in almost 80 years, with peace being shattered or threatened around the globe.

“A perilous sense of impunity is taking hold. Nuclear arsenals are growing. Human rights and international law are under assault. Criminal and terrorist networks are fueling — and profiting from — divisions and conflicts,” he said.

“As we meet today, one quarter of humanity lives in conflict-affected areas. Two billion people.”

Guterres made some recommendations, including financing for fragile states and investment by the private sector, and for nations and international financial institutions to address inequality, deprivation and underfunded systems.

“As always,” he said, “the poorest and most vulnerable pay the highest price.”

He ended, as he has recently when he speaks of Ukraine, by saying that a war’s toll extends to the global economy and to a “lost generation of children whose education and development have been cruelly snatched away.”