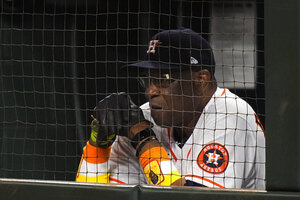 HOUSTON (AP) — Carlos Correa stood on the steps of the dugout watching as Yuli Gurriel grounded out to end Game 6 of the World Series before slowly walking away and heading into Houston’s clubhouse for what could be the last time.

Atlanta’s 7-0 win over the Astros to win the World Series on Tuesday night could mark the end of an era in Houston.

After losing Gerrit Cole and George Springer in free agency the last two years, Houston now faces the distinct possibility that Correa will soon be gone, too.

The star shortstop, who has been with the franchise since he was selected with the first overall draft pick in 2012, is a free agent and there’s concern the Astros won’t be able to keep him.

Correa had a great season, hitting a career-high 26 homers with 92 RBIs. But perhaps as much as his play, his leadership and swagger has been invaluable to this team since he made his debut in 2015. Tuesday was the 79th postseason game he’s appeared in since helping the Astros reach the playoffs for the first time since 2005 in his rookie season.

Justin Verlander, who pitched just one game in the last two seasons because of injuries, is also a free agent, as is veteran starter Zack Greinke.

Houston reached the World Series in three of the last five years and advanced to the ALCS in each of the last five seasons. The Astros won the championship in 2017, a crown tainted by the team’s sign-stealing scandal, before losing to the Washington Nationals in seven games in 2019.

Houston’s rise to the cream of baseball’s crop came after losing more than 100 games in three straight seasons from 2011-13.

The Astros made the trip to the World Series this year after coming one game shy of advancing to the Fall Classic last season. Manager Dusty Baker has led the team the last two years after being hired following A.J. Hinch’s dismissal after he was suspended for a year for his role in the cheating scheme.

Like Correa, Baker’s future with the team is also uncertain with his contract ending and no new deal in place.

After such an impressive run, the question becomes if the Astros can sustain this success or if their window for being a perennial contender is closing. While losing Correa would certainly be a blow to the team, the Astros have plenty of stars who will be back next year, led by Jose Altuve, Alex Bregman and Yordan Alvarez.

Jim Crane, who has owned the team since 2011, scoffed at the notion that Houston’s run among the American League’s elite could be ending when it was mentioned earlier in the playoffs.

“People always refer to the window, (say) the window may be closing,” he said. “Listen, when I’m here, the window’s always going to be open.”

After he finished discussing Houston’s window, the billionaire businessman made sure to keep the door on Correa’s future in Houston propped open.

“I think we have a chance,” Crane said. “I never count anything out.”