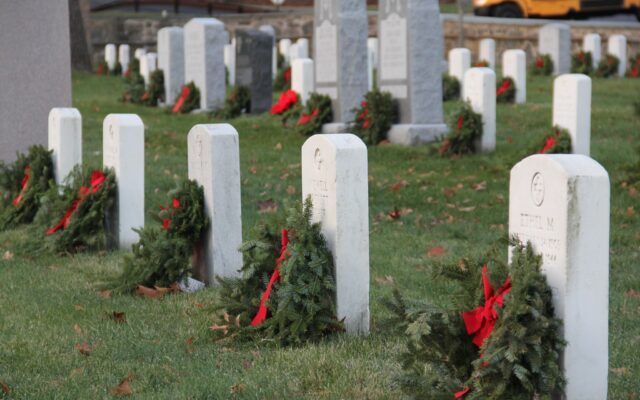 SAN ANTONIO (KTSA News) — The organization that places wreaths on the tombstones of fallen soldiers each December needs your help.

Wreaths Across America is a Maine based non-profit that sends the holiday decorations to hundreds of national cemeteries and Veteran’s monuments across the country.

But the effort to place wreaths of every tombstone at Fort Sam Houston is coming up short.

The wreath laying ceremony is this Saturday but there have only been enough donations for about 35,000 wreaths. That’s about 20 percent of the gravestones at the cemetery.

There’s an urgent call out for supporters and there are many sponsorship levels that start at 15 dollars for one wreath.

They are a long way from their goal so if you want to help, just follow this link.

Wreaths Across America began in the early 1990’s when the Worcester Wreath Company in Harrington, Maine ended up with a surplus of wreaths as the holiday season was coming to an end.

Instead of simply disposing of them, the company made arrangements for the extra wreaths to be placed on the headstones of fallen soldiers buried at Arlington National Cemetery.

The initial act has grown to include hundreds of thousands of wreaths trucked across the country every year.