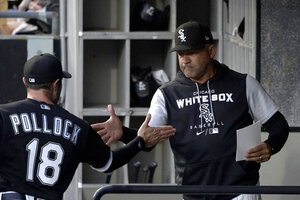 Chicago White Sox bench coach Miguel Cairo greets AJ Pollock after the White Sox announced that Cairo would manage the team in the absence of manager Tony La Russa, who will undergo further medical testing at the direction of his doctors with an undisclosed illness, before a baseball game against the Kansas City Royals on Tuesday, Aug. 30, 2022, in Chicago. (AP Photo/Charles Rex Arbogast)

The 77-year-old La Russa missed Tuesday night’s 9-7 loss to Kansas City on the recommendation of his doctors. The team said he is scheduled to undergo additional testing in Arizona with his personal physicians “over the coming days.”

Bench coach Miguel Cairo will continue to serve as acting manager while La Russa is out.

La Russa’s absence on Tuesday was announced about one hour before the first pitch. The Hall of Famer showed no signs of health issues during his pregame session with reporters and while talking to general manager Rick Hahn and former Oakland Athletics pitching great Dave Stewart before the game.

La Russa is in the second season of his second managerial stint with Chicago. The team began the year with championship aspirations, but it has been one of baseball’s biggest disappointments.

Heading into the second game of their series against the Royals, the White Sox had dropped five in a row to fall to 63-66. Chants of “Fire Tony! Fire Tony!” have been heard at Guaranteed Rate Field.

La Russa, who is close friends with White Sox chairman Jerry Reinsdorf, was a surprise hire in October 2020, and he directed to the team to the AL Central title last year.

La Russa and Sparky Anderson are the only managers to win the World Series in the American and National leagues.

La Russa was enshrined in Cooperstown in 2014. He got his first major league managing job at age 34 when the White Sox promoted him from Triple-A to replace the fired Don Kessinger. He took over that August and led them to a 522-510 record over parts of eight seasons.

Grandal, 33, had been sidelined by a left knee strain. The switch hitter is batting .203 with three homers and 21 RBIs in 74 games this season.