Yam vs. sweet potato: A reference guide to food differences 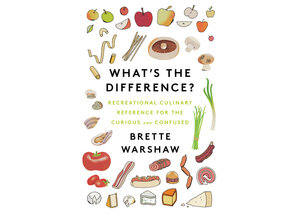 NEW YORK (AP) — You’re at the supermarket and a recipe you’re shopping for calls for rutabagas. Don’t see any? Can you substitute turnips?

While you’re thinking about that, you’ve also been asked to pick up some condensed milk. Isn’t that really just the same as evaporated milk?

The answers to those and other vexing kitchen-based questions can all be found in the insightful book “What’s the Difference?: Recreational Culinary Reference for the Curious and Confused.”

Author Brette Warshaw wades into the potentially fraught worlds of jam versus jelly, broth and stock, the various types of regional barbeque, pie versus tart, and the potentially combustible differences between grinders, heroes, hoagies and subs.

“I feel like this hopefully can help fill in the gaps for people,” she said. “And even if they do know the difference, hopefully there’s some other fun facts they can take away to make their knowledge more well-rounded.”

The entries — nicely illustrated by Sophia Foster-Dimino — are short and tight, showing off Warshaw’s journalist roots, and sometimes betraying the author’s opinion.

Take her entry on Parmesan versus Parmigiano-Reggiano. The latter is strictly regulated and refers to cheese from a specific Italian region, while the former has looser standards and doesn’t even have to be 100% cheese. She notes grated supermarket Parmesan can have cellulose, an anti-clumping agent made from wood pulp.

“To me, what felt egregious about the whole situation is that all sorts of stuff could be passing as Parmigiano-Reggiano and it’s definitely not the same thing,” she said. “I definitely whip out opinions sometimes and that felt like an appropriate place.”

But she’s not being judgy. Her fiancé has been known to sprinkle some grated Parmesan on his pizza and she says that’s OK: “The crime is not actually eating it. If you want to eat it and you like it, no judgment there.”

Sometimes Warshaw’s research discovered no difference between commonly confused items. Readers may be shocked to discover that button, cremini and Portobello mushrooms are all the same type of mushroom.

Or they may be stunned to find out that shrimp and prawns are completely different creatures but pretty much taste the same. “That’s an interesting one, where it’s like there is definitely a difference. But, in the end, it kind of doesn’t matter.”

The book emerged from a newsletter Warshaw started in 2018 which addresses the differences between all kinds of things, like how sea lions and seals are not the same and why balconies are not terraces. It started with a simple question.

“I had been debating with friends about the difference between a sweet potato and a yam and realized I didn’t know the difference,” she says. “I was kind of upset by that.”

Warshaw turns out to be a person who finds a gap in her knowledge and really doesn’t walk away, shrugging. “I did a little bit of research and then realized how many other questions I had that were of the what’s-the-difference variety.”

For the book, Warshaw concentrated on food and beverages, leaning on her own food knowledge that she’d built up at stints working at Food52 and Lucky Peach magazine.

Karen Rinaldi, senior vice president and publisher at Harper Wave, helped convince Warshaw to focus the book as a culinary resource, calling her a creative and naturally curious person with a wide-ranging brain.

Rinaldi cooks all the time and still finds things confusing, like the differences between IPA, pale ale and pilsner. The entry she most appreciates is on cobblers, crisps, buckles and crumbles: “That was the one that just delighted me because it slotted into a question that we have all the time. Now I know.”

One of the exasperating questions many consumers debate is competently dealt with: What’s the difference between canola and corn oil, much less grapeseed, peanut, safflower and vegetable oils?

“Something that a lot of people maybe don’t know is that any sort of neutral oil is pretty much fine for the same sort of purpose,” she said. “I think that’s actually a difference that hopefully makes your life a bit easier — to know the basics of what you really need and what can be swapped for each other.”

Oh, and for the record: Rutabagas are not the same as turnips, and don’t confuse condensed milk with evaporated milk.

One never-finished entry still haunts Warshaw, the one that got away: What’s the difference between frosting, icing and glaze? It seems basic but tons of her research hasn’t produced an adequate response.