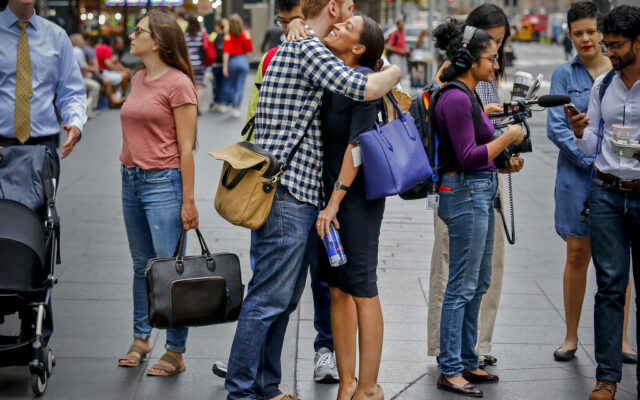 FILE - Alexandria Ocasio-Cortez, center, embrace campaign volunteer Riley Roberts in a hug, the morning after her Congressional election upset of U.S. Rep. Joe Crowley, Wednesday, June 27, 2018, in New York. Rep. Ocasio-Cortez, D-NY, used her social media accounts to confirm her engagement to Roberts, a marketing professional whom she met while both were undergraduate students at Boston University in 2011. (AP Photo/Bebeto Matthews)

She has gone on social media to say she and Roberts were engaged last month in her family’s hometown in Puerto Rico.

Roberts is a marketing professional she met over a decade ago while they were undergraduates at Boston University.

Ocasio-Cortez, who represents Queens, was the charismatic star of the “squad” of progressive congresswomen whose elections in 2018 helped return the chamber to Democratic control.

She has also been a lightning rod for criticism by right-wing politicians and pundits, who have found fault with both her politics and her popularity.