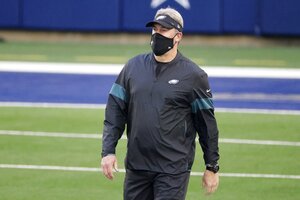 PHILADELPHIA (AP) — The Philadelphia Eagles have fired coach Doug Pederson, less than three years after he led them to the franchise’s only Super Bowl title, two people familiar with the move told The Associated Press.

Both people spoke to the AP on Monday on condition of anonymity because the team hasn’t announced Pederson’s dismissal. The NFL Network was first to report the news Monday.

Pederson was 42-37-1 in five seasons. He led the Eagles to two division titles and three playoff appearances before going 4-11-1 in 2020.