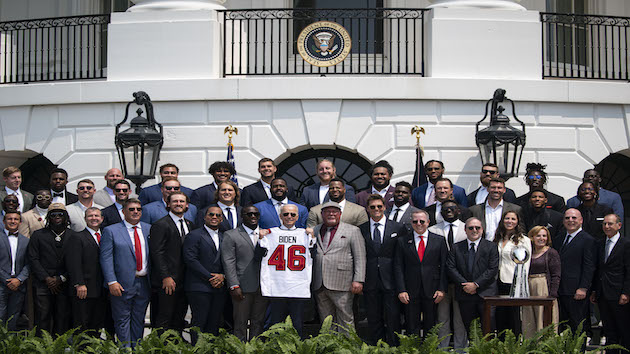 U.S. President Joe Biden, center, holds up a football jersey during a ceremony for the Tampa Bay Buccaneers on the South Lawn of the White House in Washington, D.C., U.S., on Tuesday, July 20, 2021. The Buccaneers defeated the Kansas City Chiefs 31-9 at Super Bowl LV in Tampa, Florida, on February 7. Photographer: Al Drago/Bloomberg

(NEW YORK) — President Joe Biden welcomed the Super Bowl champion Tampa Bay Buccaneers to the White House Tuesday, praising the team for helping the country get through the pandemic with some sense of normalcy, and trading some zingers with MVP quarterback Tom Brady.

As the event got underway, Biden gave a special shoutout to Chris Godwin, a wide receiver on the team and Delaware native.

He then took good-natured aim at Brady and coach Bruce Arians.

“You know, a lot has been made about the fact that we have the oldest coach ever to win a Super Bowl and the oldest quarterback to win the Super Bowl. Well, I’ll tell you right now, you won’t hear any jokes about that from me. As far as I’m concerned, there’s nothing wrong with being the oldest guy to make it to the mountaintop. That’s how I look at it,” Biden, who at 78 is the nation’s oldest serving president, joked.

He thanked the players for giving Americans something to positive to root for amid hard times.

“And I hope you all know just how important it was for, after such a tough year for the nation. In the middle of a long, dark winter, every Sunday, people were able to sit down and watch you play. You created memories that helped folks make it through and believe that we could get back to normal again. And you did it as a team, trailblazer, including the first team with two women, full-time coaching positions,” Biden said.

He praised the team for helping with the vaccination effort at their Florida stadium, but also called out players who haven’t yet gotten their shot.

“Your stadium also became a lifeline for families in Tampa Bay this spring, administering nearly 200,000 vaccine shots. And y’all who don’t have a shot, man, get one, OK?” Biden said, drawing an “amen” from someone on stage.

Brady, who walked in to the event with Biden amid some questions about whether he would show up, then cracked some jokes of his own, with the president standing nearby.

“It didn’t look right there at one point. We were seven and five struggling a little bit, as the president alluded to, but we found our rhythm, we got on a roll, not a lot of people, you know, think that we could have won. And in fact, I think, about 40% of the people still don’t think we won,” said Brady, who has avoided questions about whether he ever supported Donald Trump.

“I understand that,” Biden said, smiling.

Brady, who noted he was a bit older than many of his teammates, also had a zinger about the former president’s preferred nickname for Biden.

“We had a game in Chicago where I forgot what down it was. I lost track of one down in 21 years of playing, and they started calling me ‘Sleepy Tom.’ Why would they do that to me?” Brady said, as the crowd laughed.