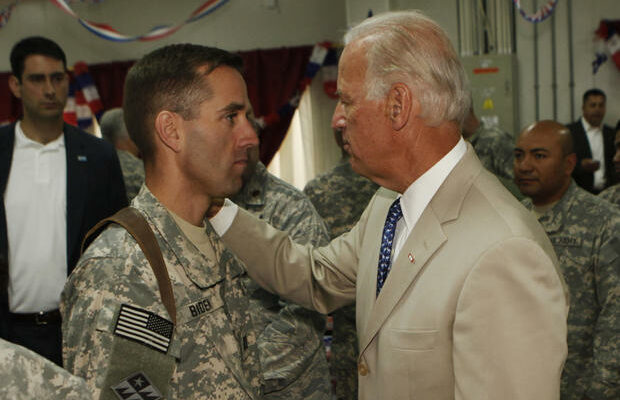 Then Vice President Joe Biden talks with his son, U.S. Army Captain Beau Biden at Camp Victory on the outskirts of Baghdad on July 4, 2009. Beau died of brain cancer in 2015 at age 46. KHALID MOHAMMED/AFP via Getty Images
▶ Watch Video: Looking back on 50 years of the “war on cancer”
Washington — President Joe Biden on Wednesday will announce a relaunch of the government’s cancer “moonshot” effort, with a goal of cutting deaths from the disease by half.

The so-called “moonshot” against cancer was first launched in 2016 with $1.8 billion in federal funds to be spread out over seven years. Biden, whose son Beau died of brain cancer in 2015 at age 46, spearheaded the project as vice president under President Barack Obama.

Now, he and Vice President Kamala Harris are set to address a White House ceremony to “reignite” the initiative, whose name deliberately echoes the 1969 triumph of NASA landing the first humans on the Moon.

“Working together over the next 25 years, we will cut today’s age-adjusted death rate from cancer by at least 50 percent,” the White House said in a statement.

While no new funding is being announced, “the president is going to set some very ambitious goals,” a senior official told reporters, speaking on condition of anonymity.

“I am very confident that there will be robust funding going forward because, I’ve got to say, in these times of disagreements, there’s certainly one thing on which we all agree, across party, across everything — which is the effect of cancer on their lives. I know nothing that unites us more and that is more bipartisan.”

The focus of the relaunch is to provide leadership in marshalling resources for a more united effort.

A White House Cancer Moonshot coordinator will be named and a cross-governmental cabinet will oversee goals, including expanding and reorganizing cancer screening networks.

“Because of recent progress in cancer therapeutics, diagnostics, and patient-driven care, as well as the scientific advances and public health lessons of the Covid-19 pandemic, it’s now possible to set ambitious goals,” the White House said.

“Taken together, these actions will drive us toward ending cancer as we know it today.”

Already, since 2000, the death rate from cancer among Americans has fallen by around 25 percent as a result of better treatments, diagnosis capabilities, therapeutics, vaccines and a halving in adult long-term cigarette smoking.