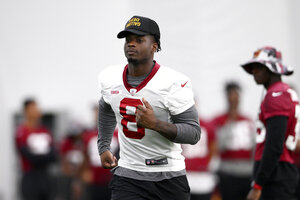 ASHBURN, Va. (AP) — Washington Commanders rookie running back Brian Robinson Jr. said Monday he underwent surgery a day after being shot in what the NFL team described as an attempted robbery or carjacking.

Robinson posted to social media from a hospital that surgery went well and thanked followers for their prayers, which the team passed along on its official Twitter account an update on his condition. Coach Ron Rivera after practice said doctors have been positive, but added there’s no timeline for Robinson’s return to the football field.

“He was in a really good place,” said Rivera, who visited Robinson at the hospital Sunday night along with owners Dan and Tanya Snyder, team president Jason Wright, running backs coach Randy Jordan and players.

A report by District of Columbia police indicated Robinson was shot in one of his legs by two suspects. The 23-year-old former Alabama player was taken to MedStar Washington Hospital Center with what the team called non-life-threatening injuries.

“It’s sad,” defensive captain and fellow Alabama product Jonathan Allen said. “Young guy. You never want to see something like that happen. By the grace of God, he’s OK. It’s not life-threatening, and he’s going to be OK, so that’s really what’s the most important thing right now.”

Rivera gathered players for a team meeting before practice Monday, 13 days before the start of the regular season. Robinson impressed since Washington drafted him in the third round and looked to have earned a starting job.

Rivera wore an orange shirt to signify his support for measures to curb gun violence and spoke about the subject. He said Robinson was in the wrong place at the wrong time just trying to get a meal when the incident happened outside a popular Washington establishment.

The veteran coach, who was watching film of Robinson along with Jordan when he learned what happened, said Robinson “sounded pretty optimistic and positive, considering his circumstances.”

“Everything’s been very positive so far,” Rivera said. “It’s just about the healing process and once he’s well enough to get out on the field, then the doctors will have to clear him, obviously, and then we’ll go from there.”

The concern about Robinson extended beyond Washington to Tuscaloosa, where he played five seasons for Alabama.

“Obviously that’s something that’s really sad,” Crimson Tide quarterback Bryce Young said. “Me individually and us as a team, I think we’re just sending our prayers and our love to B-Rob and his family in a tough time like this.”

Alabama coach Nick Saban said he tried to call before then texting Robinson and relayed similar optimism as Rivera.

“We’re glad that this is not something that is critical to his future or putting his life in jeopardy in the short term,” Saban said.

“He’s doing well relative to the information that we have, even to the point where they think he may be able to come back and play at some point in the season. We’re hopeful for that and keep our fingers crossed.”