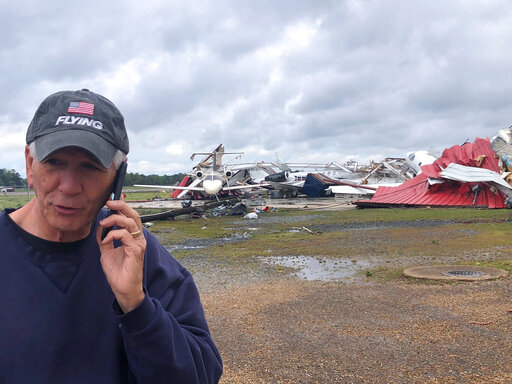 In this photo provided by Rep. Ralph Abraham, R-La., he is seen talking on his phone in front of a destroyed hangar and damaged planes at Monroe Regional Airport in Monroe, La., Sunday, April 12, 2020. (Dianne Abrams via AP)

By EMILY WAGSTER PETTUS Associated Press
JACKSON, Miss. (AP) — Strong storms pounding the Deep South have killed at least six people in south Mississippi and damaged up to 300 homes and other buildings in northern Louisiana.

Much of the region was under flash flood, tornado and thunderstorm warnings and watches overnight and around 750,000 people were without power in a 10-state swatch.

The weather service advised thunderstorms would shift across the southeast and mid-Atlantic states Monday, bringing potential tornadoes, wind and hail.