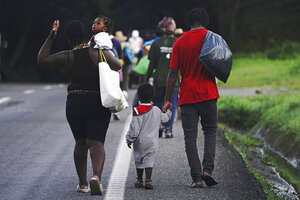 MEXICO CITY (AP) — Mexico President Andrés Manuel López Obrador expressed frustration with a strategy of containing migrants in the south on Thursday and said he would write to U.S. President Joe Biden to insist that country contribute to his favorite development projects in the region.

The president’s comments came after days of groups of 200 to 300 migrants walking out of the southern city of Tapachula. Mexico’s National Guard and immigration agents have broken up the groups and detained many, in some cases using force that drew heavy criticism.

“We can’t just be detaining; the causes must be addressed,” López Obrador said during his daily news conference. “It’s not advisable to just root the immigration plan in containment, it’s shaky,”

The Biden administration has expressed a willingness to address the root causes of migration, especially from Central America. Biden placed Vice President Kamala Harris in charge of the effort and she has visited Mexico and Guatemala to gather information.

But López Obrador has suggested the U.S. fund his tree planting and youth employment programs, without much success. On Thursday, he said that with funding, the two programs could create 330,000 jobs within six months in Guatemala, Honduras and El Salvador.

The majority of the migrants leaving Tapachula in recent days are Haitian asylum seekers who have grown tired of waiting in the southern city for Mexico’s overwhelmed asylum system to process their cases. Shelter space is limited and many have been forced to live in unsanitary conditions. They want to be able to work legally in Mexico and move freely.

Before dawn Thursday, a group set out from the town of Huixtla in the southernmost state of Chiapas. They had left Tapachula earlier this week. Some carried small children or held them by the hand as they walked up the side of the highway, their few possessions in knapsacks or plastic bags.

National guardsmen with riot gear and immigration agents have tended to wait farther up the route near Mapastepec to round up the migrants after a few days of walking when they’ve tired. On Wednesday, authorities descended on another group seeking shelter from a heavy rain.

On Saturday, immigration agents were filmed kicking a migrant who was already on the ground. They were suspended this week. On Wednesday, López Obrador insisted that the government has not violated migrants’ human rights.

But his comments Thursday appeared to signal a possible break with the containment strategy Mexico had been employing at the behest of the U.S. government since the Trump administration. Just last Friday, Defense Secretary Luis Cresencio Sandoval said the main objective of the armed forces and National Guard is “to detain all migration” and “cover the northern border, the southern border with soldiers.”

While unlikely to cease efforts to slow migrants, Mexico could seek to pressure the Biden administration for more assistance.